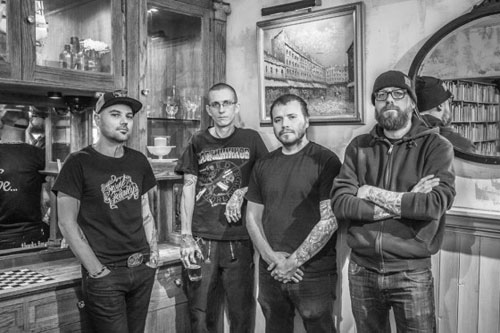 In celebration of its impending release, the gatekeepers at Pitchfork are streaming  From All Purity, the forthcoming new full-length from Chicago blackened doom misanthropes, INDIAN, from beginning to bitter end.

Recorded at Electrical Audio and Soma Studios in Chicago with engineer/co-producer Sanford Parker (Minsk, Nachtmystium, Yob, Samothrace), the six-track From All Purity is the sound of the earth dying; A corrosive audio collage where tar-black doom unites with sprawling waves of noise to create a near suffocating sensation of hate, suffering, and imminent decay. The true antithesis of easy listening, From All Purity’s earnest severity has reaped critical hails from media both stateside and abroad. Hit The Floor crowns the offering, “the most vicious and scathing pieces of bleak recorded hatred you will hear all year,” while The Sleeping Shaman names it, “the most desolate records I’ve ever heard… I’m both fascinated and terrified to see where INDIAN can possibly descend to from here.” (full review HERE) Elsewhere, MetalSucks commends the record’s “gnarled brilliance” furthering that, “it’s just so fucking ugly and unpleasant that, unless you’re in the mood to go looking for diamonds in the vomit-encrusted rough, it can sound like an endless, sickly death march.… But that’s not necessarily a bad thing: INDIAN know that doom’s slowness can be used to stretch out one’s concept of time to submerge whoever’s listening into something truly vicious. From All Purity does that masterfully.” While Metal Insider rationalizes, “It’s almost as if INDIAN aren’t playing their instruments so much as abusing them and we are allowed to witness this display of musical debauchery like some sickening peep show.”

Get hopeless with the sounds of From All Purity, now playing at Pitchfork at THIS LOCATION.

This Sunday, Windy City residents are encourage to crash the official INDIAN listening party at iconic heavy metal burger mecca, Kuma’s Corner, which will include the debut of an official INDIAN burger! In related news, the band will perform at this year’s Roadburn Festival with additional North American and European tour dates to be announced in the coming weeks. Stay tuned.