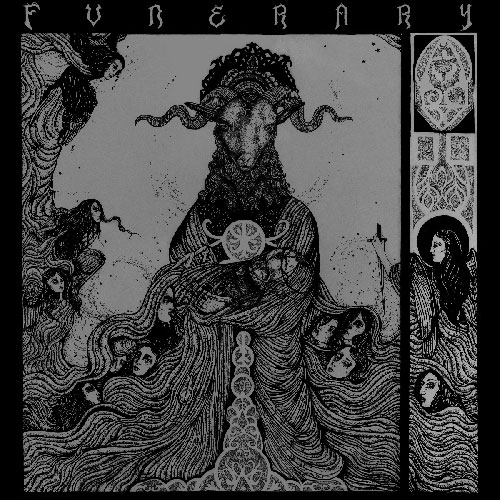 Formed in early 2013, FUNERARY came to pass by the adherence of five souls looking to coagulate in depression, grief, and anger. Finding solace in dwindling light, the band creates a musical presence that is powerful and progressive in the realm of doom metal by combining what can only be described as cosmic, transcending songs ridden with despair and indignity. They pull listeners outside of their physical being with this bleak, barren songwriting accompanied with segues of sheer tranquility and peace. With eyes set upon the starry horizon, the band carries forward on a journey of enlightenment and excellence with touring, festival and recording plans already in motion.

As as the release of the primitive Starless Aeon draws near, Cvlt Nation are streaming the entire recording now at THIS LOCATION which also includes a link to a FREE download.

And if you missed it, you can also stream FUNERARY‘s 15-minute, bleak video for Atonement/Beneath The Veil below.

Having played alongside bands such as Samothrace, Lycus, Ash Borer, Hell, Amarok, SubRosa, and many others, FUNERARY have distinguished themselves unique among colleagues and audiences alike. Drafted in 2013 for the first iteration of Midnite Communion as well as Southwest Terror Fest II, the band is continued to be met with offers prior to even releasing their debut album Starless Aeon. Set for a late Summer release on tape via Midnite Collective, the band will be touring into Oakland’s Deadfest where they will spend a weekend recording a new single with Greg Wilkinson (Earhammer Studios).

FUNERARY‘s debut album, Starless Aeon, will be unleashed on August 12th in both digital and cassette form via Midnite Collective, pre-orders for which are available HERE.