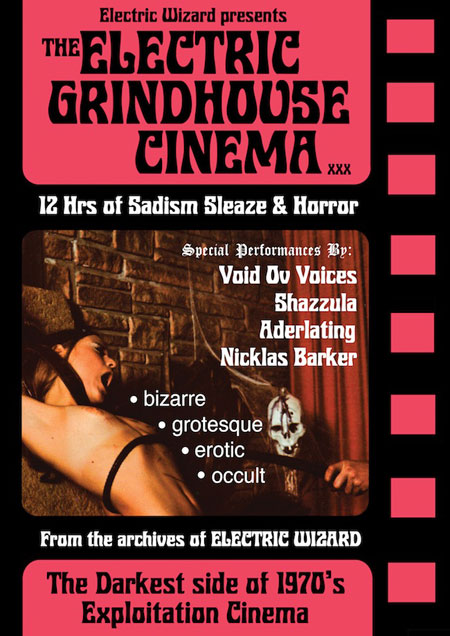 Electric Wizard proudly presents The Electric Grindhouse Cinema at Roadburn 2013 on Friday, April 19th at the 013 venue in Tilburg, Holland. A 12 hour trawl through the abyss of 70s exploitation cinema… “when cinema was still considered art and art meant tits & ass to the grindhouse cinemas of the 70s”, says Jus Oborn, “Dirty sleazepit theatres in 42nd street NY, Soho, Copenhagen, Paris, SF, etc and across the world started out by showing ‘arthouse’ films with an emphasis on sex and / or violence but by the 70s this had devolved into pure sex and violence epics.”

“Any film with the right ingredients could make money on the thriving underground circuit and some directors used this breeding ground to explore their own cinematic obsessions… Jess Franco, Jean Rollin etc… and some just sunk to the bottom for money, money, money…Harry Novak, 42nd street S&M etc…..either way they got darker, sicker, more depraved, shocking and sleazy. They have a primal roar that is unique compared to modern cinema . They are harsh, violent and evil like early Sabbath, Stooges, Pentagram, etc etc. We have handpicked from our personal collection a eclectic selection of obscure oddities.”

“The grimmest blackest nightmares of a disenchanted era. Also we have special performances from similar darkminded souls…We are proud to present a special performance by Void Ov Voices (Attila Csihar) invoking unholy incantations with voice and audio manipulation over Horror / exploitations darkest jewels.”

“Shazzula will perform cosmic rituals to the drugcrazed and depraved ‘midnight’ cinema when only druggies and maniacs remained. Aderlating will improvise audio atrocities in front of a specially selected compilation of the sleaziest and grotesque loops from New York and Denmark, films funded by shadowy satanic organisations and grim underworld crime syndicates…. and we have a performance by Nicklas Barker (My Brother the Wind) whose improvisations invoke the sleazy horrotica of the Euro Grindhouse factories.”