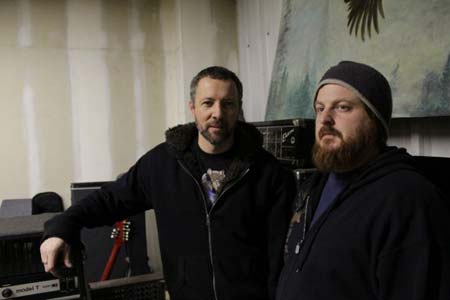 Southern Lord confirms that the highly anticipated second full-length from Salt Lake City-based duo EAGLE TWIN, The Feather Tipped the Serpent’s Scale, will be released via deluxe digipak and digital download in late August 2012, with a 2xLP version to follow several weeks later.

The Feather Tipped the Serpent’s Scale, picks up right where the EAGLE TWIN’s acclaimed 2009-released debut LP The Unkindness of Crows left off. In this installment the crows documented in the first album have battled the sun and were burned back down to earth as black snakes, the concept of the album continuing mainly on the snake and its various mythic and symbolic incarnations. Ultimately the great ancestral snake is transformed from its lowly beginnings back into a bird soaring upon the thermals. As with The Unkindness of Crows, guitarist Gentry Densley (ex-Iceburn) drummer Tyler Smith (ex-Form of Rocket) recorded The Feather Tipped the Serpent’s Scale with Randall Dunn at London Bridge Studio, the finished product bellowing with over fifty minutes of the band’s most mammoth material to date. 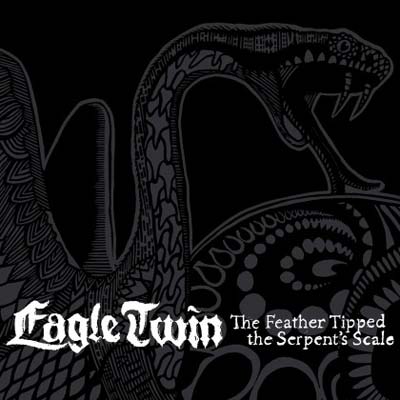 A must-see live act, known for obliterating audiences at every performance, the band have begun confirming new live actions in support of the forthcoming album. EAGLE TWIN kick off a West Coast tour alongside fellow Salt Lake City outfit Gaza on August 1st, both bands set to perform as part of the massive 2012 installment of The Power Of The Riff West, alongside Sunn 0))), Off!, Dr. Know, Repulsion, Noothgrush, Xibalba and tons more at LA’s Echo/Echoplex on August 8th. Following that the duo will travel across the globe for an eight date tour of New Zealand and Australia with Russian Circles. The band’s full list of tour dates at press time is posted below with more to be confirmed in the coming days.

The Power Of The Riff: Fourth Annual Installment Of Los Angeles Fest Confirmed

BITE THE BULLET Video Premiere For The Track ‘Be Like You’