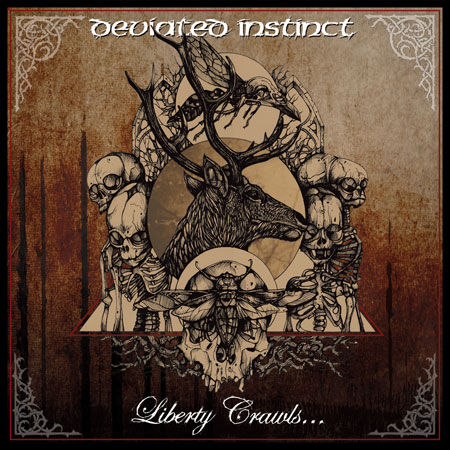 After 22 years of deafening silence, UK crust punk godfathers DEVIATED INSTINCT have returned with a vengeance! The influential outfit just came off a decimating appearance at Maryland Death Fest X, and are on the road with labelmates and like-minded punx DRESDEN (check below for remaining dates). Look for them at the Chaos in Tejas festival as well!

Profane Existence are honored to present the band’s first brand new recording in decades – a four-track EP entitled Liberty Crawls to the Sanctuary of Slaves. The record will be released on various formats on June 10, 2012 and include a download card which includes a track from the same recording session for their split 7″ with SUMMON THE CROWS available on Nakkeskudd Plater, plus a special bonus track and full release artwork and booklet/lyrics.

The 12″ EP is pressed onto audiophile 180 gram black vinyl @ 45rpm for a full fat sound, and is limited to 300 copies. In keeping with the heavier black vinyl the artwork has been tweaked to give the sleeve a darker, more foreboding aura.

Listen to the a new track ‘Thorn In Your Flesh‘ below.

DEVIATED INSTINCT formed in 1984 and were a crucial pioneering band in the early British punk/metal scene. Along with bands like Antisect and Amebix, DEVIATED INSTINCT‘s music has influenced legions of bands and helped to define the sound we know today as “crust”. Their long-awaited return, Liberty Crawls to the Sanctuary of Slaves, is everything fans have come to expect and more. This album features four songs of epic proportions that deftly bridge the gap between d-beat style crust and heavy metallic doom..