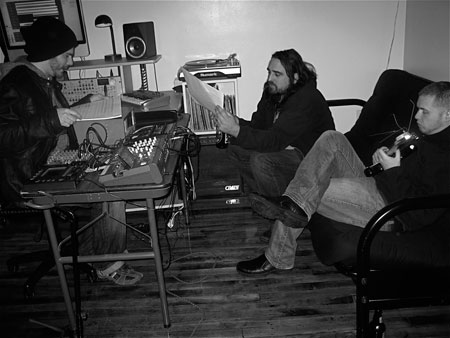 The third album from the avant-death/doom ensemble EHNAHRE and the follow up to the critically acclaimed 2010 album ‘Taming The Cannibals‘ on Crucial Blast, ‘Old Earth‘ again finds the trio of Ricardo Donoso, John Carchia and Ryan McGuire (the latter two former members of avant-prog rockers Kayo Dot) exploring their unique fusion of hellish death-doom, blackened prog, avant-jazz and experimental modern music composition, to earth-scorching result which you can stream below.

It begins with distant rustling sounds creep out of a dank underground space, as the dusty warbling strains of an old 78 rpm record drift through, introducing ‘Old Earth‘ with an eerie haze of slightly corroded, somewhat hallucinatory sound. As a terrifying chorus of operatic female howls suddenly waft out of cracks in the floor, the guitars finally appear, all alone and slowly weaving an ominous dissonant melody that takes over the piece as the listener is propelled further into EHNAHRE‘s twisted soundscape. It’s not long before the band tumbles into their trademark atonal death-doom, that spidery fractured guitar suddenly swelling into a monstrous clanging anti-riff while withered, ragged screams and bizarre mewling join in, and the rhythm section erupts into brief blasts of chaotic slow-motion heaviness and free-jazz inspired drumming. 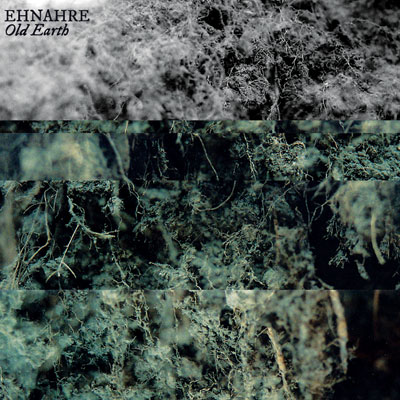 If anything, EHNAHRE‘s sound becomes even more abstract here, the warped noisy death metal (which often resembles a cross between Disembowelment and Obscura-era Gorguts) folding in on itself and mutating into crushing, droning riffage before it trails off into the intensely creepy second act. Here, the double-bass, keyboards and delicate percussion take over, joined  by the gorgeous and ghostly trumpets of guest musicians Greg Kelley (Heathen Shame) and Forbes Graham (Kayo Dot), offering up one of EHNAHRE‘s most spellbinding moments as the band ventures into an utterly creepy world of twilight avant-jazz fusion  and shadowy atmospherics. The following chapter winds back into the bone-crushing deathdoom, another monstrous wave of lurching heaviness and dissonant skronk, spilling over into the final passage, bludgeoning jagged death metal riffs welded to a lurching, lopsided dirge, the final moments collapsing in dramatic fashion as the band decomposes back into the hallucinatory wash of sounds that began the album…

As terrifying as it is haunting, ‘Old Earth‘ is another intensely challenging and completely unique offering from Ehnahre, who still sound like nothing else in the metal/avant underground. It has some of the most bleakly beautiful, burnt-out moments the band has brought us so far, and those jazz-influenced passages in the middle of the album are pretty goddamn stunning. Might be difficult listening for some, but EHNAHRE‘s otherworldly heaviness is immensely rewarding for the adventurous listener.

The CD edition of ‘Old Earth‘ comes in a full color digipack. The digital release will be available on the same date.