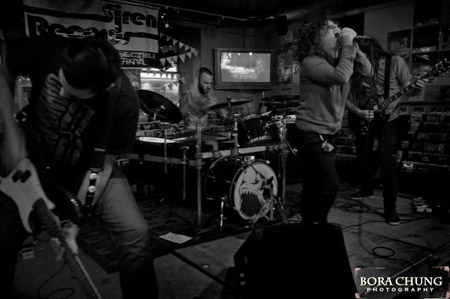 Philly-based hardcore/punk unit COP PROBLEM are primed to drop their self-titled debut 7″ next week via War Torn Records in North America and on Prejudice Me Records in Europe.

COP PROBLEM‘s potent and  infectious brew of politically-charged content combined with their vigorous spirit captured on their debut EP has been bagging killer responses from US and European zines in recent weeks, in addition to the band relentlessly winning over live audiences throughout Philadelphia and the tri-state area over the past year and a half. The mutinous three-songs on the 7″ were recorded by Will Yip (Blacklisted, Converge, Paint It Black, Lauryn Hill) at Studio 4, and the cover art commissioned to world-renowned artist/tattoo artist Jason Angst.

The 7″ is available via mailorder from War Torn, Prejudice Me, the band direct, BrooklynVegan is also hosting a stream of the entire Cop Problem 7″ RIGHT HERE, and if you missed it, you can read Adam’s review of the record HERE.

In support of the release, COP PROBLEM have locked down several new shows throughout the Philly area, New Jersey and a gig in Cleveland with Mutilation Rites, with more shows still being booked, including an East Coast tour this Summer.

Death Hawks And Pekko Käppi & K:H:H:L Confirmed For Houses Of The Holistic At Roadburn 2015