Skip to content
News
28th November 2012 Lee Edwards Clamfight, I Versus The Glacier, News, Pre-Orders, The Maple Forum, The Obelisk 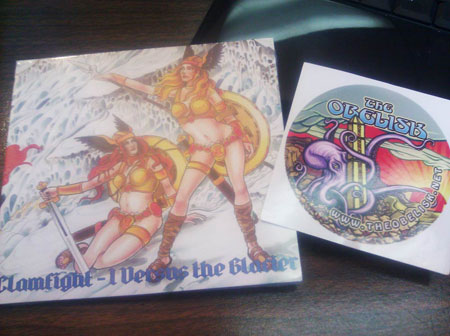 Riffmongering Westmont, New Jersey-based CLAMFIGHT has completed their second album ‘I Versus The Glacier’ which is set for release on January 22nd, 2013 exclusively through New Jersey-based The Maple Forum, the in-house label of the excellent The Obelisk webzine.

Limited to 300 copies, it’ll come with a hand written thank you note, JJ will also throw in some Obelisk stickers for good measure and you can pre-order the album over on The Maple Forum webstore at http://mapleforum.bigcartel.com.

As with their impressive 2010 debut Volume I, the new opus, I Versus The Glacier, was recorded by Steve Poponi at Gradwell House Recording in Haddon Heights, New Jersey. The thundering nine-track ruckus that is I Versus The Glacier magnifies the signature CLAMFIGHT blend of sludge, thrash, and doom that, according to Doommantia webzine, “has more than enough groove to break down walls,” yet ventures into even more expansive and torrentially-infectious territory on the nearly fifty-minute album.

CLAMFIGHT consists of Andy Martin on drums and vocals, Sean McKee on lead guitar, Joel Harris on rhythm guitar, and Louis Koble on bass. Self described as “music for fat dudes and the buxotic women who love them,” this crew of childhood friends has been playing together in various bands since 1997, existing together as CLAMFIGHT since 2002. Having shared the stage with great local acts including Wizard Eye, Pale Divine, Bitchslicer, Hellblock Six, Maegashira, Rukut, A Day of Pigs, Wally, as well as some more well known national acts including Kings Destroy, Solace, Jucifer, and Iron Man over the years, the band have amassed a legion of fans in the tri-state area and within the diehard doom/sludge community. Their debut, Volume I, was self-released in August 2010 and has received favourable press from Doommantia and The Obelisk among others, and was named the #7 album of the year from The Obelisk’s top 20 list.