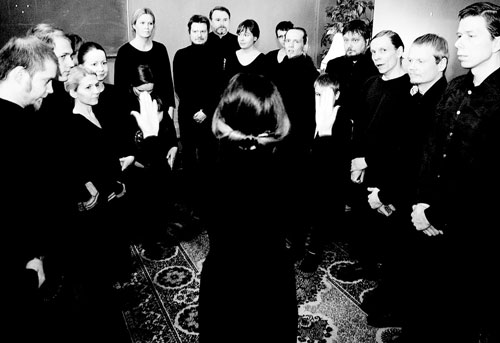 The illusive MANSION are re-issuing their now sought after debut EP ‘We Shall Live’ which is now now getting the 12” vinyl treatment after gaining the attention of Germany’s Streaks Records. The second coming arrives with an insert of the lyrics to the song ‘We Shall Live’ for chanting lessons to the new cult followers.

Here is the statement by the owner of Streaks Records:
”After my copy of their limited private released debut vinyl showed signs of wear from playing it over and over again, I had to ask the band to re-release their ‘We Shall Live’ on 12″ EP to make this outstanding piece of art available to a wider audience.

Their historically realistic, somehow creepy yet morally righteous concept of Cult Rock that is based around the austere christian cult Kartanoism that existed in Finland between the twenties and fifties, hit me instantly and impressed me deeply. The music perfectly mirrors this atmosphere, presenting the songs like sermons that hem oneself in but beguile as well with its catchy melodies. The arrangements are elaborate and the voice of the frontwoman, named Alma after the original mother that founded the cult, creates a lot of dramatic tension.

A totally focused and cohesive debut that crucially needed a vinyl re-press.”

In other MANSION news, the band will be playing the inaugural Roadburn Festival in April and are currently working on their debut full length recording which is set to see the light of day around April/May, more news to follow as and when it becomes available.

Junius & Skeletonwitch To Play Houses Of The Holistic At Roadburn 2015