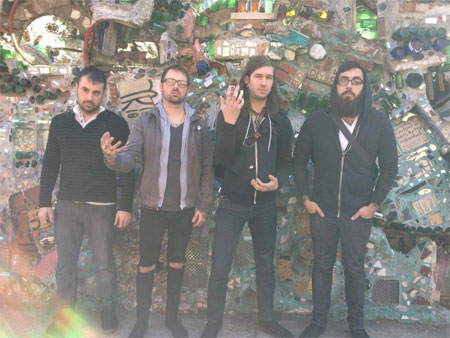 Burning World Recordsis proud to announce that we are releasing VATNET VISKAR’s debut EP in Europe this fall. The American foursome from New England received favourable reviews all round when the EP came out in the US in March of this year. Metalblast.net maybe says it best:

“While their contemporaries traffic in pristine production and unearthly Alcestian shimmers, these guys are far more raw and immediate. Everything’s still distinguishable and there’s no muddy maelstrom of impenetrable noise, but there’s just enough of a filthy edge for it to be considered a black metal album. And the compositions are top-notch. These guys have a great grasp of harmony through black metal riffs – it’s not quite on the same level as the Steve Reichian neoclassicalisms of Wolves in the Throne Room, but it’s definitely well on its way to getting there.”

This release has been described on Pitchfork (7.9!) as “Aside from some surprisingly wide-eyed lyrics that explore general themes of existential nihilism and a desire to tear down antiquated systems and build anew, none of those concerns really become a factor here. Vattnet Viskar is simply a strong start from a band that has tapped into the current transmogrification of black metal and proclaimed– quickly, restlessly, and enthusiastically– that it has something to say about the process.”

Listen to the whole EP on Bandcamp here:

If you want to know more about the infkluences of the band please check the mixtape they made at Sonic CVLT Nation here.

The EP will be out on CD, Vinyl and Digital through Burning World Records in November.