As retro doom metal sorcerers, BRIMSTONE COVEN, prepare for the official unveiling of their self-titled full-length and inaugural release for Metal Blade Records, today Revolver Magazine summons forth the cosmic echoes of Children Of The Sun.

Spawned in Wheeling, West Virginia in 2011, BRIMSTONE COVEN manifests a captivating amalgam of dark, smoky cult rock that echoes the eerie reverberations of Black Sabbath and Pentagram, mixed with the classic rock expressions of Led Zeppelin and Pink Floyd, all the while preserving a vintage rock sound mixed with a style all their own. The outfit’s Metal Blade debut boasts seventeen inebriating tracks of manic occult conjurings – a combo of their self-released full-length and EP — complete with new mastering and the vintage art renderings of Creighton Hill.

Comments the band on the latest premiere: “This song focuses lyrically on prehistoric cultures that saw our Sun as a Godhead, protector and creator.”

Fall into the gritty, psychedelic rock swagger of Children Of The Sun courtesy of Revolver Magazine, at THIS LOCATION.

And if you missed it, check out Behold, The Anunnaki, still streaming at The Obelisk HERE. 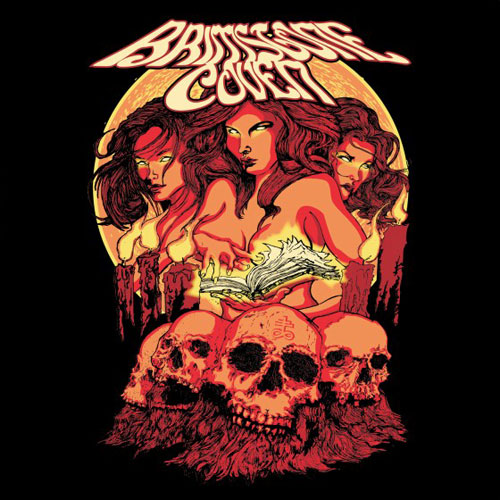 In related news, BRIMSTONE COVEN will bring their bewitching odes to the stage with additional ceremonies to be announced in the weeks to come.

Brimstone Coven will be released via Metal Blade Records on August 5th, 2014. Pre-order you copy at THIS LOCATION where you can also sample delightfully jam-laden fifth cut, The Grave.