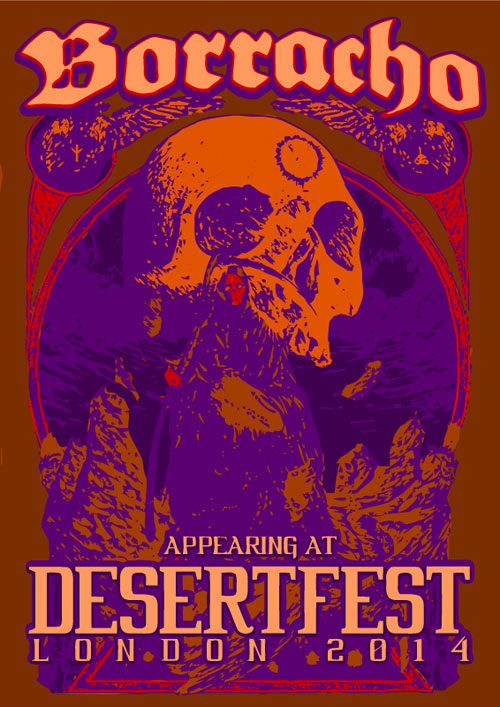 Since the release of their 2011 debut full-length, ‘Splitting Sky’, Washington D.C.-based heavyweight riffers Borracho have been met with a tidal surge of praise for their burly but natural approach, built around their simple stated formula: “Heavy repetitive grooves.” They’ll make their first trip across the Atlantic to show their wares at DesertFest 2014!

In 2013, Borracho’s second album, ‘Oculus’, found them down a guitarist/vocalist but no less dedicated to Heavy. Fucking. Riffs. Constructed to highlight the centerpiece groove of ‘Stockpile’, the fuzz on ‘Oculus’ brought Borracho’s nodworthiness to another level; guitarist Steve Fisher stepping comfortably into the role of singer alongside the swaying rhythm section of bassist Tim Martin and drummer Mario Trubiano.

Says Fisher of playing DesertFest: “We couldn’t be more honoured to be joining our friends in Spirit Caravan and Sixty Watt Shaman to help represent the mid-Atlantic heavy scene in London this year. To kick off our first tour in Europe by being a part of an event like DesertFest is amazing and we look forward to seeing some old friends and fans, and making some new ones.”

What can DesertFest expect from Borracho? Some of the US’ finest in up and coming underground heavy rock, shipped with much love and warm vibes straight from the Doom Capitol.

THE BODY: Debut Album Set For June Re-Release Via At A Loss Recordings