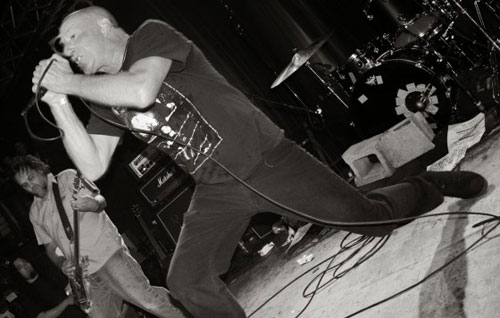 As previously announced, following their invasion of the European continent — beginning at the massive Hellfest in Clission, France on June 21st, and running through Roskilde Festival in Roskilde, Denmark on July 4th — BL’AST will take part in the four-day Philadelphia-based This Is Hardcore Fest. But this week an additional pair of shows has just added, with BL’AST now confirmed to hit New York City and Boston preceding the festival. This three-day run will mark the band’s first East Coast shows in over two decades!

The new BL’AST! live lineup sees original vocalist Clifford Dinsmore (Dusted Angel, Gargantula) and guitarist Mike Neider (LAB) joined by Nick Oliveri (Kyuss, Queens of the Stone Age, Mondo Generator) on bass and Joey Castillo (Queens Of The Stone Age, Danzig, Eagles Of Death Metal, Goatsnake, Wasted Youth) on drums. In 2013 Southern Lord released the newly-revamped vintage recordings from BL’AST! in the form of the  Blood! LP, the recording mixed by Dave Grohl at his 606 Studios on the legendary Neve console as featured in the recent Grohl-produced documentary Sound City. Then in March of this year the label released The Expression Of Power (review here), including several different sessions/recordings of the band’s seminal debut LP, The Power Of Expression. BL’AST!’s boundary-pushing form of hardcore, advanced musicianship, unstoppable energy and intense perseverance is as prominent now as it ever was.

Hear the main disc of the triple-LP The Expression Of Power HERE and the Blood! LP HERE.

Watch for additional BL’AST! updates as the year continues.