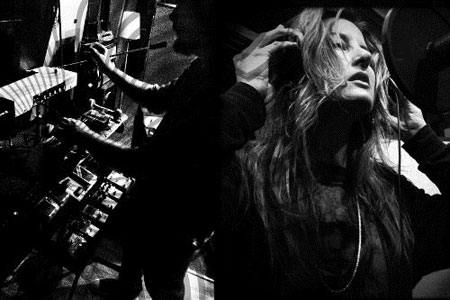 US quintet KYLESA have announced the title and release date of their forthcoming album. One of the most anticipated hard rock releases of 2013 and the follow-up to their critically-acclaimed album ‘Spiral Shadow’, ‘Ultraviolet’ will hit the stores on May 24th (May 28th in North America).

“Unspoken“, a new song from the eleven-track album, is available now for people who subscribe to the Season of Mist newsletter. Of course, if you already subscribed to the newsletter, you can still get the MP3. All you have to do is enter your email address in the widget you will find on the respective websites of our partners Terrorizer (UK), Metal.de (Germany), and Inferno (Finland).

“Whereas ‘Spiral Shadow’ was a warm album suggesting concepts of hope, ‘Ultraviolet’ is a bit colder and darker”, explains songwriter/guitar player Laura Pleasants. “All of our studio albums have their own unique identity and we’ve always been a band who strives for something different than what current fads suggest. With ‘Ultraviolet’, we took a step inward and wrote music that we felt we had to write; this album centers around the multiple themes of loss and you can feel it in the music. Everyone goes through it during their lifetime and this record reflects that experience”.

KYLESA released a rarities collection in November titled ‘From The Vaults, Vol. 1’, (review HERE) which featured unreleased, new and alternate versions of songs spanning the band’s catalog as well as one new song titled “End Truth.” Cope and Pleasants spent over a year going through their archives preparing the release.

KYLESA will return to the road in May with more details forthcoming.