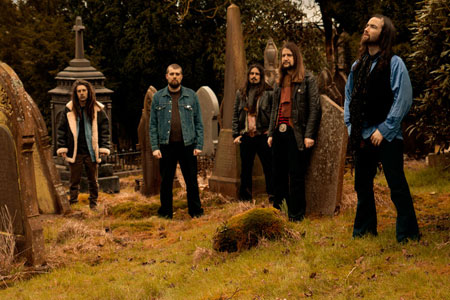 Shaman Recordings are ecstatic to announce that their first release will be the debut album by Prog Doomers BLACK MAGICIAN, the title for which can now be announced as ‘Nature Is The Devils Church’.

The album was recorded & mixed by Matt Richardson at Full Stack Studio, mastering is being handled by Tony Reed (Stone Axe/Saint Vitus) and will feature 4 tracks of mystical Folk inspired Prog Doom which clocks in at just under the 40 minute mark.

‘Nature Is The Devils Church’ is set for a Summer 2012 release featuring artwork from up and coming illustrator Andrew Sloan and will be strictly limited to 300 copies on black vinyl with a digital download (and the possibility of a CD released by the band themselves) available soon after.

Pre-sales will be available, although no official date has been set yet so in the meantime, check out the demo track ‘Four Thieves Vinegar’ below to give you a taste of the horror that is to come…