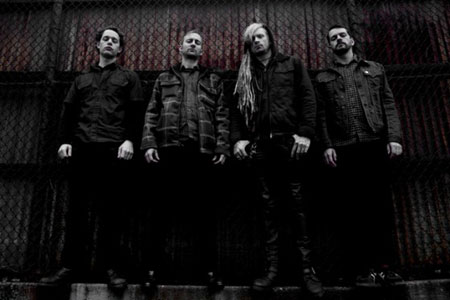 Brooklyn’s favorite industrial blackened doomsmiths, BATILLUS, are pleased to unveil their work of cinematic grimness in the form of “Concrete.” An ultra bleak, narrative story that brings the track to life in a most uncomfortable fashion, “Concrete” was directed by Gretchen Heinel, features actors Candice Freshko, David McManamon, Rush Aaron Hicks, Mockingbird Girl, Jane Marguerite and La Luna and serves as the band’s first ever music video.

Help plant your next nightmare, courtesy of “Concrete” below:

“Concrete” opens BATILLUS’ mammoth Concrete Sustain full-length, released via Seventh Rule Recordings earlier this year. With songs that range from relentless mid-tempo churns to subterranean crawls, BATILLUS coheres the extremes of heavy music into a surge of massive riffing, rolling over and descending upon the listener with the force and intensity of steel dropping from the sky. Originally conceived in 2007 as an instrumental trio, the BATILLUS lineup expanded in 2009 to add vocals, synthesizers, and samples to the dynamic range of their music. Described by The New Yorker as “[a] sludgy four-piece that slows monstrous Black Sabbath riffs to a crawl to produce highly textured compositions of droning doom-metal,” and commended for their meticulous weave of “searing feedback and blistering riffs” by NPR, the tight and focused songs on Concrete Sustain reflect this expanded palette, which has had a profound effect on the band’s writing process. Concrete Sustain was recorded and mixed by Sanford Parker and BATILLUS at Sound Generation in Manhattan and Hypercube in Chicago and mastered by Collin Jordan at the Boiler Room.