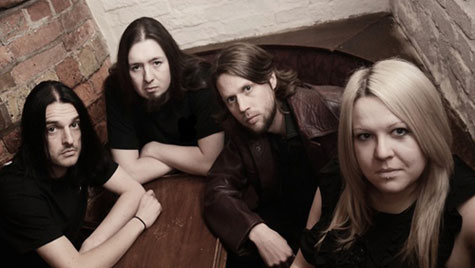 Yesterday was a great day for the English band ALUNAH! First Napalm Records officially release their 2nd album on vinyl. And then, they are confirmed for the DESERTFEST BERLIN 2013 !!

Birmingham based ALUNAH is a Psyche/Stoner/Doom band which unleashes an incredible paganistic sound characterized by thick guitars, a punishing rhythm section, and earthy and hypnotic vocal melodies. Sometimes groovy, oppressive, or downright grimy depending on what the situation calls for, the songs are dark and slow without being downers !

Billed as the “Future of Doom” by Terrorizer Magazine, ALUNAH‘s “White Hoarhound“, their 2nd full-length album was released in September 2012 on PsycheDOOMelic Records, and is now officially available on vinyl on Napalm Record !This album is the follow-up to their debut “Call of Avernus” released in late 2010, and their EP “Fall to Earth” in 2008.

Consisting of Soph Day (vocals and guitar), Dave Day (guitar), Gaz Imber (bass) and Jake Mason (drums), ALUNAH have spent the last 6 years building up a reputation for being one of the most hardworking and consistent live bands by playing national dates and festivals (Desertfest London, Desert Storm Birmingham) with international artists such as Fu Manchu, Orange Goblin, Karma to Burn, Acid King, Witchcraft, Graveyard, The Storm and shortly High on Fire !

Even though their reputation as a great live band is already built, they never played beyond UK… Damn !… so many of us have never seen them !

Fortunately, the DESERTFEST BERLIN is here to fix that lack ! Be there !!