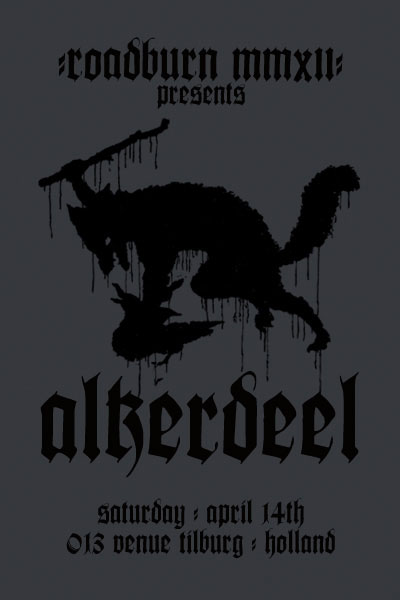 Roadburn usually don’t like surprises as far as their production affairs go, but due to some small changes, they’re able to add another band to the lineup for Saturday, April 14th. That’s the kind of surprise they do like! Thus, they’re really pleased to announce that  Belgium’s Alkerdeel have been confirmed for Roadburn 2012.

Alkerdeel is currently making waves in the underground with their sophomore album, Morinde, which will be officially released on February 24th via  Consouling Sounds and At War With False Noise.

Alkerdeel has pushed up the ante with the release of Morinde as not only the songs have matured and gained more depth, the lo-fi approach of the previous recordings has made way for a sound that can reveal all its sludgy, blackened, sluggish nuances. Musically, Alkerdeel infuse raw sludge and doom with filthy blackmetal, and if you’re a fan of Burning Witch, Darkthrone or Beherit, then you”ll definitely like Alkerdeel, too. Horns up!