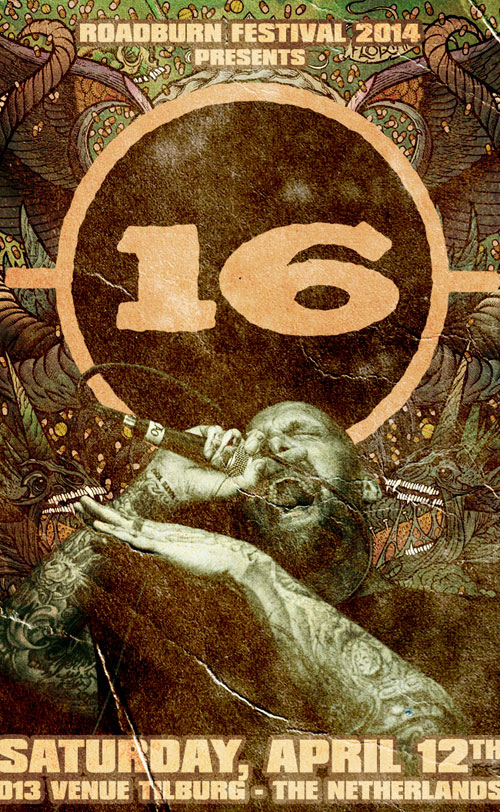 Over the last two decades, Califorian veterans -(16)- have been pioneering heavy-as-hell, ill tempered sludge metal, alongside fellow luminaries Buzzov*en, Eyehategod and Crowbar (among others).

Despite all the anguish, pain and countless lineup changes that 20 years brought, -(16)- remained a dependable source of gutsy, misery infested, torturous sludge, captured on albums like Drop Out, Zoloft Smile and Deep Cuts from Dark Clouds (out on Relapse Records).

Whether its the band’s mid tempo, aggressive metal assault, their sludgy dissonance or aggro-punk-hardcore filth, -(16)- spits it out with hateful, jaw-punching glee – thriving on chugging guitars, grinding bass and growling vocals that drive home the point like a blast of scuzzed-up vitriol.

Roadburn are looking forward to get punched in the gut, and smacked in the face as well by -(16)-‘s jagged blocks of buzzing sludge on Saturday, April 12th at the 013 venue in Tilburg, The Netherlands. Nope they won’t mind it abit, as they’ve been waiting for so many years for this to happen!

Turn up, tune down, give up…

Roadburn Festival 2014 will run for four days from Thursday, April 10th to Sunday, April 13th, 2014 at the 013 venue inTilburg, The Netherlands.