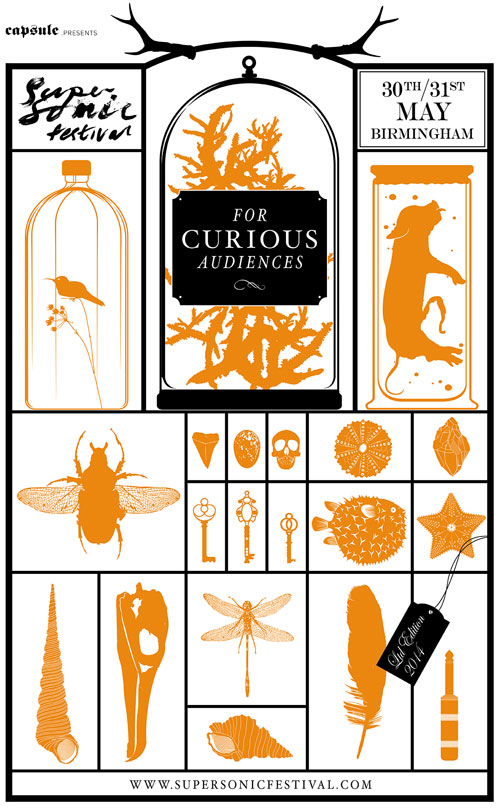 One thing that is immediately obvious in the atmosphere of a Supersonic event is the feeling of floating in the recesses of an enormous musical and artistic Venn diagram. Whereas something like Glastonbury basically tries to cover near enough everything in its sphere, festival organisers Capsule have a finely tuned sense of what goes together and what provides a satisfyingly suitable clash. This curatorial prowess is met with praise from devotees – in my imagination Supersonic fans are split into two groups: those who have an eclectic resonance with the line-up and those who will grow to over the festivals duration.

By and large, you don’t go there to sway spillingly to endless heavy riffs, neither do you go to spend hours evaluating each performance with a thesaurus of Avant-Garde terminology stuffed under your eyelids.

Birmingham may have spawned some of the most influential and celebrated rock bands of the 20th century but its musical heritage, though recognised, is never a focus. Stephen Bishop, though holding a position as vocalist for the horrible grinding machine Drunk In Hell, is miles removed from a rock band. His set of distressed electronic washes and crushed rhythms under the solo moniker Basic House opened the main stage with no fanfare at all, just a cautionary sonic assault to get you in the mood. ANTA meanwhile were just about to inaugurate the secondary stage with something more colourful and the set that followed showcased a band whose prog sensibilities are clearly well informed and diverse. Switching smartly between extended sections of doom and melodic twiddliness, organ and guitar lines giving life to the hazed purple light.

Matmos were up next and over the course of their set took the audience in several contrasting directions, most of which stood the observer somewhere between the bizarre and the ritualistic. Hunched with close-cams peering over tables full of technology, a warm inclusive energy lifted the performance from its abstract tone-work. Subtlety, musicality and anarchy were the tools they used. From the bizarre sermon delivered by the disembodied head, their guest noise act that ravaged the middle twenty minutes of their set and the quite beautiful and settling conclusion, these once Bjork collaborators provided the first highlight… also the first of many dust particles to rain down from the Custard Factory sealing. A satisfyingly unhinged side effect of the airborne frequencies.

Representing the sludge, Opium Lord had a good go at demolishing the second stage a minute later. Local to Birmingham, they smash out that kind of hardcore and doom double attack thing much like a lot of bands before, but no less satisfying when another riff slams into your chest like a massive pipe. Closing the main stage Sleaford Mods offer this edgy, rather imposing spectacle of a couple of pissed off / darkly emphatic men who have taken over a house party because everyone is too scared to tell them to piss off. Via the simple tools of one laptop, one microphone and a few cans of Polish lager, their take on punk feels strangely authentic, even when all the music, a scuzzy lo-fi breakbeat type thing, is coming pre-made from the computer through the PA. In command of the task of queuing up more of these instrumental back beat is the guy drinking the beer, who grimaces and grins whilst jigging around in baggy sportswear. His partner is the showman, and stalks the stage, snarling and gurning towards the audience, assaulting the microphone with aggressive lyrics and plenty of swearing. Definitely a divisive act but uniquely entertaining.

Clear fuzziness penetrates the next day’s atmosphere, but fleetingly so, as Ex-Easter Island Head lift tired eyes and spirits with their wonderful, shimmering take on avant-rock music. This, their large ensemble (they also play as just three people), sees no less than fourteen guitar players flood the stage alongside a percussionist. Inescapably hypnotic rhythm exercises are coaxed out in long, almost ceremonial pieces that explore the nuances of each player and the micro-interactions between them. The lush atmosphere, tangled transience of manipulated strings and the almost danceable drum beats that tie it all together are a winner, filling the industrial interior with resonating excitement.

Agathe Max clearly has a different take on rapture and over a set that perhaps goes on a little too long, produces elongated drones with her violin as the primary sound source. Most impressive is her capacity to eke out some truly breathtaking bass work, I guess through some octave shifting or some such method… just when you think the lighter timbral drifts have outstayed their welcome, the introduction of this monstrous layer pulls you back into a darkened lull. Rattle lighten the mood considerably next on the 2nd stage, playing a drum kit each and combining sweet, intertwining vocals. They are reminiscent of Seattle two-piece Sick Bees, though much less aggressive and with a slight tweeness, in the very best respect of the word. Youth Man‘s punkish rawness takes elements of Hellnation-like fastcore and bits of black metal to create a powerful whole sound, completed by vaguely operatic, tortured screams – excellent.

And if that second stage could take another bashing, it certainly got one. In an attempt to invoke altered states of consciousness, Ryan Jordan absolutely pummels the air with seething expanses of drilling kick drums, tempos rising to furious levels. From almost anywhere on the site this din could be heard and with the accompanying strobe as pretty much the only light source, intensity was delivered in tonnes. Now a brief spell of anticipation as I notice Sly And The Family Drone‘s members moving equipment around. There is undeniable excitement standing there wondering what part of your body will be bleeding less than an hour later, which stranger you will be apologising to for getting a bit too cymbal happy an inch from their ear. The combination of shuddering, gurgling noise, manic screaming and processional drumming is not enough for Sly – to complete their spectacle they deconstruct themselves over the course of their set, offering bits of drum kits and other detritus to the often bewildered crowd and encouraging them to make as much noise as possible. They never disappoint and always appreciate the applause with grace. Hard to do when the hole in the ripped boxer shorts is providing a clear view to the vocalist’s penis. This lot share members with much of the London DIY underground – bands like Shield Your Eyes and the dazzling Nitkowski – this is a healthy scene that’s well worth familiarising yourself with.

In the tense run up to headline act Swans, a restlessness takes over and a fleeting experience of the margins of the programme commands the next hour or two. Thoroughly enjoyed was Graham Dunning’s physical techno performance in the cinema room, where objects were constructed on top of spinning record decks, creating a wonderfully abstract, demystified take on looped electronica. Also very much appreciated was the Super Shorts compilation of Supersonic performances from previous festivals.

Swans have leapt from a fairly shadowed position in recent years, to one where they are touted as the best live band in the world right now. Though this is a massive claim and will obviously have plenty of detractors, they are always astonishing, and never disappoint. This group of quietly intense men actually have a really friendly stage presence, arching inclusive energy over the photography pit and towards the audience. Suffering a power cut only a few steps into the set, this false start was met with good humour and, when things got started again, was kind of a source of increased euphoria for the rest of the performance. Churning the atmosphere into a mist of dark excitement, they proceeded to floor all in attendance with their powerful ritualistic Swans-Rock (for it is theirs and theirs alone and using terminology like ‘post-punk’ or ‘industrial’ just doesn’t do it), with some moments being almost unbearably overwhelming. It’s the blend of charging, kraut-esque rhythms, solemn gloom and ceremonial fervour that make what they do so stunning. It is impossible to wrestle out of its grip and the only way is to let it take you. That kind of feeling when a band finishes a jaw-dropping set and you’re left shaking your head, vaguely thinking of eating a veggie-burger to calm down, basically vibrating internally from the amplitude and emotion of it all. That’s Swans. They do it every time.

Fortunately for the broken, Supersonic doesn’t send you off to lie staring at the ceiling in your hostel with Michael Gira’s voice still crawling around your head. This is Saturday night don’t forget and besides chucking endless riffs and exploding 909s at you, they also want you to have a bit of a party. So, to the bar, and to watch people make fools of themselves dancing to 80s synth-pop classics whilst you effortlessly look cool and well dressed. And this is basically how it ended. There was the last cigarettes smoked around the water in the courtyard and they sky began to lighten, and Supersonic is done for another year. Bravo. 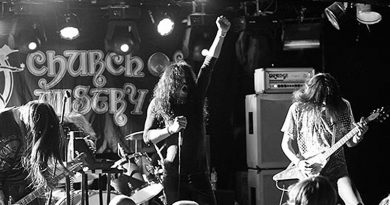 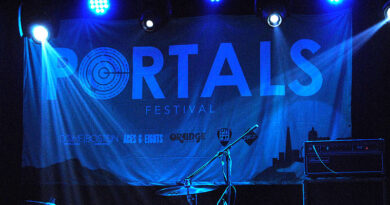 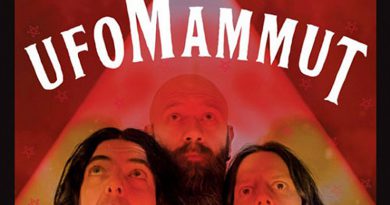