It feels different being out and about, Bristol in April evening sunshine casting even the post-war clutter of Wine Street in a light of grandeur. I’ve walked past the venue a few times, working nearby, and always pegged it as ‘a nice-looking coffee place for people younger and hipper than me’, but had no idea that there was a back room. Adam of tonight’s promoter Schwet has described it as an exciting new space, so I’m curious to see what’s behind the front-of-house coolness.

Slowly some other greying muso-types are beginning to assemble, the advance guard ahead of those more fashionably late. What is presumably Wukir Suryadi and Rully Shabara of Senyawa are relaxing outside, urbane in what is probably strangely a fairly familiar part of the world. Bristol seems to hold some sort of connection for these two, as noted in my review of their most recent album Alkisah I think I have missed them on at least three previous occasions in Bristol, which for a band ostensibly from around 7,000 miles away is not bad going. Perhaps there is no mystery about the connection though, as Avon Terror Corps were one of the various labels handling the global release of Alkisah, and both support acts tonight contributed to the ATC remixes that accompanied the release here.

Exploring inside… the space is promising in a black-box kind of way, although the big empty expanse of floor has me a bit worried that the unpredictable Bristol crowd has let us down tonight…

However, Laughter Of Saints do in the end take the stage to a reasonable audience, faces hidden behind various veils, the three of them in some tension of the ritual and the everyday. Between comfort and militancy, they cast a spell of acidic hesitation, of folkish lightness, and some parochial Thrones-like passages that tower high and totter under their own weight.

Between comfort and militancy, they cast a spell of acidic hesitation…

Searching for more of their music at home for context I haven’t found much, and indeed I’m not sure how much I can engage with this sort of thing outside the live context, however much I got into that BADA record.

Definitely one for live is one-man act Sophrosyne (presumably an ironic name), laying confidently, claims the stage with his nihilistic black metal dance music. The people were appreciative, but I couldn’t get myself fully on board – fundamentally the backing tracks were just not quite there, and in a city that knows hard rave music the theatricality of Sophrosyne in cape and corpse-paint came across with a touch too much pantomime.

claims the stage with his nihilistic black metal dance music…

Maybe just not enough oomph in the PA… Some interesting reflections on the nature of scene tropes and borders of parody, how silliness can excuse weak material, and my own readiness to retreat into dismissiveness arose, so this was perhaps time well used. I will give this another chance at another time, but on the night, I was impatient for Senyawa.

And here they are, Rully dapper in suit jacket and Wukir ready behind the stand that holds his hybrid strings/percussion/pads input device. And straight in, the sound emphasising power, recognisable from Alkisah but reaching much gnarlier places live. Rully struts and sends out his vocals like some strange MC, or enthusiastic wedding guest, over sounds that pulse and slip between drones and beats and the core melodies of each piece. The set shifts in unfamiliar logic between dug-in dooming and sparse techno, out into motorik space.

sounds that pulse and slip between drones and beats…

My curiosity from listening to the album is both met and extended – the performance context gives far more of a sense of who this is and where they want to take you, but the otherness of it clearly goes beyond just ‘music from far away’. Called back for an encore, there is some shift in tone and the progression-release dynamic is more to the fore, and then they are done, killing stages on their way to Roadburn Festival, which by now they have played, and no doubt brought a new euro crowd round to their way of sounding. More power to ‘em I say.

Bristol has hosted another successful strangeness, Schwet continue to challenge and delight, and Senyawa have shown another room what makes them such a talked-about group. 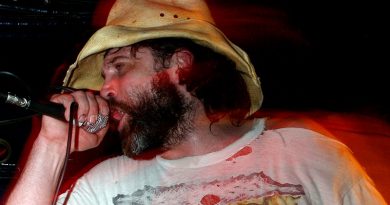 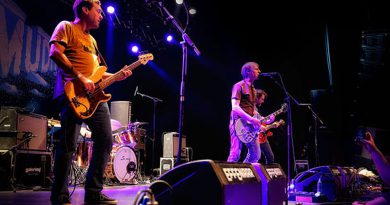 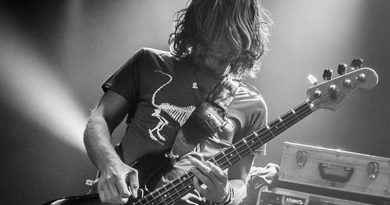