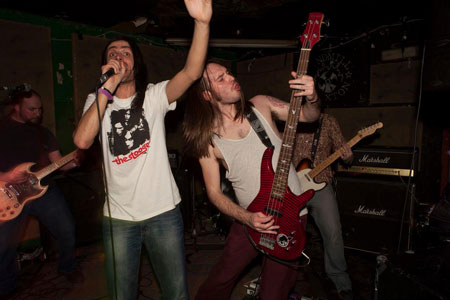 Here at DesertFest HQ we’ve been doing some experiments. We ain’t messing around here – there are Bunsen burners, SPSS datasets and white lab coats lying around all over the place! So what have we learned from this cactus-tax funded piece of analysis? Well, during our careful dissection of a certain infamous British hard rock band, we have successfully proven the hypothesis that GROAN are, in fact, 67% TRUE DOOM.

So what does this mean for the remaining 33% I hear you exclaim? Well, you can fill out the rest of that pie-chart with righteous segments of HARD rock, THUNDER BOOGIE heavy metal, INSANE trouser choices and a significant quantity of FACIAL hair. GROAN were formed roughly around 1967 by guitarist The Riff Wizard who then met lead singer Lord Mazzereth in a field of frolicking, opium-fuelled virgin pagans; such fields as I’m told were in abundance at that time. Soon however the initial line-up became a forgotten myth confined to Celtic folklore and the rarest of parchment inscriptions sealed in a series of long lost mountain caves. Yet in 2009, GROAN were resurrected and rose like a phoenix silhouetted by several glow-sticks from their tomb of rock. Lord Mazzereth, who some say is older than Jesus, had forgotten all of the old hymns, but a new line-up of devout worshippers to the altar of the noble ryffe were nonetheless recruited and they wrote some new, better gospels together in haste. Now rounded out as a well-drilled five-piece with the addition of former Invasion and Pettybone drummer Zel Kaute, plus Trippy Wicked drummer Chris West and Mike Pilat (ex-Ocean Collective) on guitars joining frontman Mazzereth and corduroy comedian Leigh Jones on bass, the time to Groan is now!

Here to rock your life out of control with the likes of ‘Witchy Woman’, ‘Throne of Weed’ and ‘Gods of Fire’, this is one party train of David Coverdale fanatics, playing the best riffs that Sabbath threw away, that you’d be a fool to miss. A FOOL I TELL YOU! And if that’s not enough for you, the last time I saw this band, they were all dressed as bananas. Be there, or be somewhere sensible.