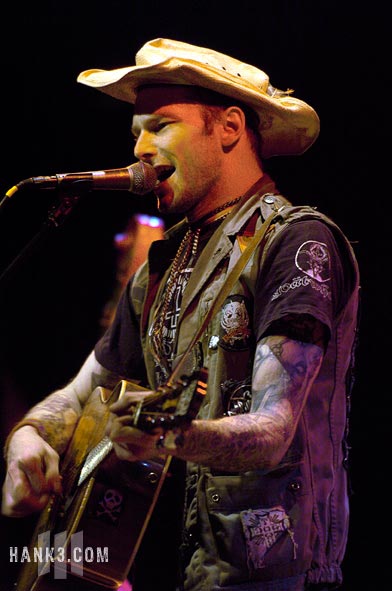 Hank Williams III (aka Hank 3) is a singer, drummer, bassist, and guitarist. In addition to his honky tonk recordings, Williams’ style alternates between country, punk and metal. He is the principal member of the punk metal band Assjack, the drummer for the Southern hardcore punk band Arson Anthem formed with Phil Anselmo and Mike Williams of the sludge band Eyehategod, and was the bassist for Pantera singer Phil Anselmo’s band Superjoint Ritual.

Since the third-generation rebel’s most recent LP, 2010’s aptly titled ‘Rebel Within’, he’s gotten off Curb Records and launched his own label, the Megaforce-distributed Hank3 Records (the new moniker to distinguish/a representation of his post-Curb career). He’s also been busy, to say the least, writing and recording FOUR albums at once—Ghost to a Ghost/Guttertown, a double LP of refracted country music, the literally unprecedented 3 Bar Ranch Cattle Callin and the sludgy Attention Deficit Domination and which all dropped on the very same day.