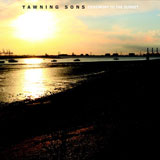 Originally set free into the world on 26th September 2009, Ceremony To The Sunset was a unique hybrid collaboration between desert dwelling Yawning Man mastermind Gary Arce and UK based instrumental psychedelic rock band Sons Of Alpha Centuari. Released under the moniker Yawning Sons, this project blossomed from a band being produced to a triumphant partnership where laid back Californian cool collided with the British masters of cerebral ambient riffing. As mouth watering as the prospect of this project was already by the time you threw in vocal contributions from Wendy Rae Fowler (QOTSA), Scott Reeder (Kyuss) and Mario Lalli (Fatso Jetson) it was clear before even hearing the first notes that the album would be something special.

Fast forward 5 years and Alone Records have decided to give Ceremony To The Sunset the loving treatment it deserves and as a result are re-releasing the album on yellow, red orange coloured transparent and heavyweight vinyl; surely a treasure for any fan, especially given it’s 500 copy limited run. This deluxe gatefold edition provides a timely reminder of the special nature of the collective mindset, working in perfect harmony, that created a truly one off experience and the heavy weight, thermonuclear orange version that graces my turntable like the setting California sun, makes the album sound as vibrant as it did when it was first released. The large artwork format is a joyous delight that takes me back to my formative musical years pouring over the sleeves of records, looking to digest every scrap of information no matter how trivial.

For those who missed the album first time around, it is a light and largely instrumental affair for which the word ethereal was seemingly invented (a word I used to describe it last time out and one that is still the best fits now) and a record that time has not diminished my fondness for; Considering I spend the vast majority of my time listening to heavy and angry music, Ceremony To The Sun is a delight with its clean tones and fresh, almost whimsical shoegaze.

Beginning with the ambient, almost whale-like siren calls that create the tones for Ghostship – Deadwater, the album builds with Wendy Rae Fowler’s (Mark Lanegan Band) vocals drifting like a lullaby whilst drums crash in the background. It was and is utterly absorbing and mesmerizing.

Tomahawk Watercress continues the explorative tonal theme as the almost indie guitar flows over this instrumental creating and expanding on rhythmical patterns, shifting and shimmering as does the appropriately named Whales In Tar which seems to float by before setting up the one two combo of Mario Lalli on the haunting Meadow and the tribal chanting of Garden Session III featuring the talents of Scott Reeder singing, which is accented by pinging guitar notes and bongo drumming. For all the intensity of this track it passes like a sigh before the upbeat and energetic Japanese Garden, which even now still sounds to me like the desert dwelling relation of Stone Roses John Squires, and shines in its original form instead of the tweaked version that appeared on the 2009 release.

Finally as an added incentive to get your hands on this copy is the previously unreleased track Shores Of Desolation; a droning piece of bleak calm that really does compete the feeling of a floatation tank that I talked about 5 years ago. It may not be the essential thing on Ceremony To The Sunset, but it seems a fitting coda as the disc fades to a close.

I praised this album to the sky when I first reviewed it and to be honest there is little else I can do now such is the beauty of it. Gary Arce and the Sons Of Alpha Centauri formed a chemistry that transcended their original project and wound up creating something incredibly unique; pulling in a few friends was just the icing on the cake as this album would work as a pure instrumental or with lyrics on every piece.

It contains skill born of subtly and passion for the craft as well as flair and now it has the presentation it so longingly deserved. Grab it while you can.