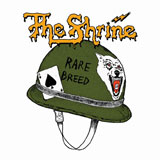 I remember the very first time I saw The Shrine and I instantly knew they had it, whatever “it” is. They hadn’t even started playing, but I could tell by their loosey-goosey swagger, their denim-or-nothing retro attire and those crackling vintage amps that all their fingers, hips and manes were built to do was rock like hell. The power-trio burst out of Venice, California virtually unannounced with their aptly-titled debut Primitive Blast back in 2012; a peddle-to-the-metal instant classic that rammed a skateboard under the heels of a Thin Lizzy greatest hits set before barrel-rolling down the side of an empty swimming pool. 2014’s follow-up cock-rocker Bless Off tightened the screws even further, ushering those deep-rooted Black Flag influences back up to boiling point and delivering banger after banger on repeat until you eventually dared to finally switch off. After hitting the European and US gig and festival circuits painfully hard throughout both 2014 and 2015, would The Shrine have run out of speed, riffs, gas, smokes and fucks come their next effort?

Basically… No. If anything, Rare Breed, the band’s third full-length and the first for Century Media, is their most complete and self-defining outing to date. If we’re talking about rock, as in pure, unadulterated, teRIFFic, no frills, all thrills, bish bash bosh rock, then in this world right now, The Shrine are up there with the very best of the “modern retro” era. Rare Breed sees these hairy Jeremys slow down the pace in parts and concentrate harder on solid song-writing, emotive hooks and musical variety – weaving more into their repertoire than just party-hard, fuzzy riffage and stiff, bulletproof rhythms. But worry not, these jams are all still kicked firmly into your hearts, souls and loins with all the joy of their predecessors, and then some.

The breathless, one-two opening pow-wow of Coming Down Quick and Death To Invaders picks up from exactly where the Bless Off album left off: cruise-controlling down a boulevard of beer-flinging, fist-rattling awesomeness with a hot girl on one arm and half-chugged keg under the other. Frontman Josh Landau is in your face left, right and centre from the off, barking his sniggered quips about peace, love, war and drugs into your cranium almost as fast as his guitar leads scream past your ears. By his side, his trusty charges of Courtland Murphy (bass) and Jeff Murray (drums) are on top form, slamming into every groove and steamrollering every obstacle in their way with a reliable grunt and that power-summoning crunch.

The title track, The Vulture and What’s Left for Me slow down the rapid firepower to more of a tactical smoulder. Not so much battering your senses as soothing you into some more complex twists and turns, whilst still keeping their reliably neck-shaking and sing-a-long-able spirits sky high. This is a set of songs that go from banging rockers to contemplative mood swingers and back again with consummate ease. Despite Rare Breed the song having been previously released as the B-Side to a cover single of Soggy’s 1981 classic Waiting For The War in early 2014, the suped-up new version rocks that Motörhead-meets-The Cramps harder than ever before. We’re barely halfway through the playlist and the dynamite is already well and truly lit.

Acid Drop is a raging slam of a tune. Rocking that same near-cartoonishly knuckle-headed brand of riff as Hellride from Bless Off did just last year, it stomps its way into your consciousness and refuses to unclench its teeth until you’re screaming those triumphant “TAKE THE DROP!” lyrics along with Landau and co. Josh’s potent rasp manages to be both as convincing and commanding as it does goofish and humorous all at once, whilst his fretwork dances between bullish and dazzling all in the blink of an eye. Meanwhile, Never More Than Now and Savage Skulls And Nomads manage to become two of the most liquid punk songs The Shrine have put to tape yet, sliding along like a Jägerbomb across a bar lubricated with bourbon and writhing teenage bodies all under the watchful eye of Murray’s metronomic pummel.

Is it arrogant to put a guitar solo-only track on a punk rock record? Not so much when you have a guitar player like Landau, whose fingers bound between a Hendrix-like scorch and a Van Halen-like flurry on the invigorating Pull The Trigger. Murphy and Murray then return to lock The Shrine into one of their most well-written songs to date – the wrenching Dusted And Busted. Beginning as a softly rolling ballad with Landau setting lighters a-sway with his tale of a down-and-out lover careering towards an early grave, the tempo soon builds until you have a full-scale rock ‘n’ roll riot of a conclusion on your hands as the riffs rain down faster than the beer upon the sticky, sweaty floor.

Closing us out with the taut, muscular psyche-out of Space Steppin, it’s perhaps scary to take note that The Shrine are still relatively new to this scene: still growing, still expanding, still exploring ideas and still apparently having shitloads of fun in the process. They have all the ingredients, all the tunes, all the licks and all the class to go wherever the hell they want to go next and at the moment I see nothing standing in the way of them producing barn-storming, fun-loving rock records for years yet to come. The Shrine are, by their very definition, truly a Rare Breed.