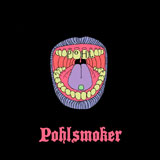 Bristol based Pohl are a band that follow in the footsteps of such two piece luminaries as Death From Above 1979, Black Cobra and Big Business. What we have here with the tongue-in-ass release of ‘Pohlsmoker’ is authentic, big-amp powered riffs, relentless drums all peppered with the ever-cool octave fuzz combination that never seems to get old.

The first track, titled ‘Fuckboots’ is a storming, monolithic explosion of sound that is powered by the duality of the guitar and drums battling each other like two massive, fucking wolves. The beat swings in parts which; always appeals to those seeking something slightly more from your average stoner rock.

As ‘Fuckboots’ ends, we’re greeted by a riff which sounds like Cliff Burton from beyond the grave, incessant drumming follows suit as the riff peaks and drifts out into a tom work-out.  Titled ‘Candyass’ the vocals on this suit the track excellently, the riff continuation throughout with what sounds like three drummers competing at once. Screaming is seldom in this one which I feel is a wise move and is reminiscent of early Big Business. A big swinging stoner riff and beat wades in to close the track and will please anyone that listened to this because of the Sleep connection.

When bands try and start a song with a clean intro, it usually falls apart and becomes a weak link, with Pohl, this isn’t the case. The drums work perfectly with the clean-ish chords to build up to bewildering thrash-off. The next riff is simplified and features some pretty opulent time signatures, naming this track ‘Forward the Old Joke’ you are left wondering what that has to do with any of the track aside from the final chord which seems to sum the whole thing up perfectly.

‘Anathematician’ screams in next with plenty of reverb added to the muted arpeggio guitars and bellowing vocals. The octave filled guitar riffs slam down with severe ferocity, this is one downside to having two members in one band, the only way to fill out sound and create massive impact in certain parts is to utilise an octave pedal and sound like there’s two guitars playing, Jack White pretty much made his career on this, no bad thing but possibly a little passé.

Chorus pedal is switched on for what could possibly be the album’s high light. Cleanly picked intro techniques return here only to be blown out of the water by a monstrous riff that has enough force behind it to shatter bone. ‘Vampire’ is the name and the riffs are in sheer abundance here, the main riff is early Big Business through and through. Who doesn’t dig that?

‘Pohlsmoker’ and Pohl are clearly some form of witchcraft with belting cover art which makes Warhol’s Rolling Stones tongue logo look like something that your granddad would wear on a tee-shirt. Fuck the rest, Pohl are the best.

Get this in your ears…now