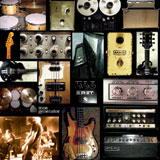 Mos Generator are a band whose name I’ve always been aware of but never actually checked out – therefore this 10th anniversary reissue/remix/remaster of their debut album came as a welcome opportunity, especially having been left jawless from seeing guitarist/singer Tony Reed’s other band Stone Axe in action last April. Unfortunately, not having heard this album before, I’m afraid I have no way of confirming how much better this mix sounds in comparison to the one released in 2002. Suffice to say that one thing that is consistently brilliant (and I don’t use that word lightly) throughout is the production – Reed wears his influences on his sleeve not only in terms of what he plays but in the way he engineers his records (he owns his own studio and recently finished recording a new album by none other than Saint Vitus!) – every instrument comes through CRYSTAL clear, there are no fancy studio frills or tricks, or the “wall of guitars” effect that is found on so much music deemed ‘heavy’ of late. To be sure, everyone in this band is playing loud and note-perfect through very cool old gear (the cover gives you a handy rundown of what they use!), but it’s the sheer energy and talent that has gone into writing the music that makes this record heavy.

Opener “Lumbo Rock” is one of the strongest tracks on the album, and is a lesson in how to write a killer HOOK, with added piano that is reminiscent of the best mid-era Stones records, and by association fifties rock’n’roll. BIG plus. There’s even a touch of Wishbone Ash with the twin lead around the minute and a half mark. So far, so seventies.

Unfortunately, the next song (“Stone County Line”) held my attention somewhat less, and was to prove the uneven rule that would colour my overall opinion of this album. The thing is, Tony Reed clearly doesn’t have a bad riff or hook in his body. His vocals however, are somewhat less versatile – this song is the most unfortunate example of this, a track where the vocals are (to my ears) the element which makes or breaks the song. Repeated listening just didn’t convince, especially after the stunning opener.

Thankfully, we are safely back in the land of RIFF for “Acapulco Gold”, where Reed’s vocals entwine beautifully with a killer melody (YES! IT STILL EXISTS IN ROCK’N’ROLL! THANK YOU!) and Hammond organ (I must confess that inclusion of this instrument easily wins me over!). The live version is one of the best of the bonus tracks included on the promo, and is worth hearing for the stripped-down raunchy contrast to the album’s polished sheen (and that’s no bad thing!)

“Sleepin’ Your Way To The Middle” was my favourite song title on the album, and was one of the tracks I was most looking forward to – sadly, Reed’s strained vocals didn’t convince me, and my heart sank until just before the two minute mark, where a chugging beat and stereo guitar panning came into the equation before slowing down into a bass led lull, duly launching into best Deep Purple mode! One of the most amazing turnarounds I’ve heard of late within a song – Reed adds a growling touch to the vocals that end the song! Interestingly, the live version of this sounded more consistent to me…

“Y’Juana” has us back on track, played tighter than a duck’s arsehole, this is a textbook demonstration of how good you can be if you’re a well-oiled hardworking band. And on this, Reed’s vocals are KILLER! One of his best ever riffs, just fantastic! Cracking live version as a bonus too!

“Pentagramaph” is the most varied track on the album, a perfect closer that’s got a fair bit of funk to it, reminding me of Floyd, not least because of the Gilmour-esque (is that even a word???!!!? Fuck it, I’m sticking with it) slide guitar. Creepy whispers launch this killer track that rolls fantastically along, progressing through organ, bass riffs and a solo five minutes in that made me think of Frank Zappa (don’t ask me why!). The unreleased track “Hearts and Heads” would have best been left in the closet though – generic is a kind way of referring to a track that, oddly, displays none of the inventiveness that makes this album such an interesting (if occasionally uneven) experience. Thankfully the other bonus (live) tracks are all great listening and very much worth the price of the LP/CD. Methinks I need to see this band on tour, but I still can’t help but shake the feeling Stone Axe embodies all the elements I love on this album and turns them up to ten…