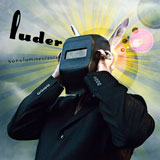 It’s quite common for these days for a band or artist to form a label with a view to releasing their own product and, on occasion, the works of others. It’s far less common, however, for someone to start a label and run it successfully for years before finding themselves in a band with some product of their own to release. This is the situation that Small Stone leading light, Scott Hamilton finds himself with Luder. Now, two things could potentially happen here; looking at the greater part of the Small Stone back catalogue it would be not unreasonable to assume that this will be an album of beer slamming, weed huffing, cap wearing, redneck rock and roll. The second assumption is that a music fan and good businessman does not necessarily a good musician make and that this could well be a case of “I’ve got a label so I’m going to use it” and the end result could be a large hessian sack of many hues of shit. With that in mind most people will not be expecting an album that, not only sounds like nothing else on the Small Stone roster but is literally incredible from the first note to the last.

Formed from the ashes of Slot after the untimely death of that band’s guitarist Billy Rivkin and essentially to pay a one off tribute following Small Stone’s release of their lost recordings, it was decided that the vibe was strong enough to continue under a different name and Luder was born featuring bassist/vocalist Sue Lott from Slot, Phil Durr from severely underrated 90’s grunge funkers Big Chief and now also of Five Horse Johnson, former Novadriver and current Five Horse Johnson drummer Eric Miller and of course the aforementioned Mr. Hamilton. It is immediately apparent from the minute the laser hits the plastic that this is not a band that have grown up together doing bongs to Sabbath in their basement. Each member brings his or her own musical agenda to the table to weave together a vast range of musical influences, sometimes so disparate as to be confounding, into a cohesive, passionate and beautiful whole. This isn’t metal by any stretch of the imagination but it’s possessed of a depth and weight that is equal in heaviness to any of the badger faced Norwegian church burners but on a far more spiritual and emotional level.

Essentially Luder have no rules and no preconceptions about their sound, any idea is a good idea and the key aim to create exceptional music. Heavy riffs interlock with fluid bass lines and drums that groove and twist in an almost tribal fashion. Phil Durr and Scott Hamilton will often approach each song from an entirely different standpoint; a fuzzy stoner or metal riff may weave around a shimmering shoegazy line that evokes the spirit of My Bloody Valentine or The Cocteau Twins. The overall effect with the bass and drums is of a psychedelic Jane’s Addiction at their most esoteric…think of some of the more “out there” ethnic moments from the “Ritual De Lo Habitual” album and you’ll be, not necessarily in the same ball park but certainly in the right suburb to find the ball park. Musically, although this may twist and turn from the lazy psychedelia of “S-Words”, to the almost jazzy inflections of “Hot, Girl-on-Girl, Vampire Action” to the more stoner oriented grooves of “Selfish and Dumb” to the summery metal pop of “In Love With Love”, it is Sue Lott’s restrained vocals that hold this album together. Her breathy, sultry and seductive vocals serve to add a much needed counterpoint to the traditional rock band format that backs her voice up. Her deeply sensual style gives lyrics such as “you don’t give a shit what I want” a gonad withering intensity that has so much more effect than any misdirected aimless aggression.

As sonically diverse and experimental as this album can be at times at its core lies a strong collection of very catchy, memorable and frankly awesome tunes. The aforementioned “Selfish and Dumb” comes close to Garbage’s prime 90’s output but exceeds it in terms of its immediate grasp on your senses. If this was released as a single with the right push behind it I have no doubt that this could bother the charts…if it wasn’t for the band’s contrary nature ensuring their most commercial tune is ridden with more “shits” than the toilets in a dysentery ward!!!!

So far 2010 has thrown up some real musical gems and this album sits right up there at the top with the best of them. Ironic then that, in many respects the music industry and sales of CDs are in decline just as music seems to be throwing up more albums actually worth spending money on. Small Stone have done it yet again…sucking in the 70’s, hell no…fucking awesome in the here and now…damn right!!!!