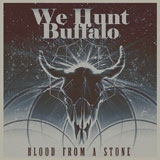 Deep in some woods, near the outskirts of Vancouver, BC, yetis occasionally emerge, clutching mossy guitars and drums covered in psychotropic fungi. It could be yetis, or it could be the three members of We Hunt Buffalo – hairy rock warriors with a tree-felling sound and enough musical depth and wit to stand amongst the finest purveyors of what I’ve affectionately (somewhat jealously) called ‘Beard Rock’.

‘Beard Rock’ is a molten mix of heavy rock, fuzz psych, strung-out grunge, damaged prog and proto-metal pump ‘n’ thrust that you can find being produced by bands across the musical spectrum. Mastodon slightly reined in their ‘Beard Appeal’ with their latest snoozer ‘The Hunter’ & Baroness have been fiddling with the facial furniture for their past couple of records… so it’s up to a select few hirsute fellows to peddle this beer-burp harsh-toke denim-metal to hordes of headbanging hellions and red-eyed rascals.

We Hunt Buffalo make ‘Beard Rock’. Soaked into the hairy tapestry of ‘Beard Rock’ are records like ‘Master Of Reality’, ‘Badmotorfinger’, ‘Dirt’, ‘Songs For The Deaf’, ‘Blues For The Red Sun’, ‘Dopesmoker’, ‘Tres Hombres’, ‘Blues For Allah’ and, more recently, ‘Murder The Mountains’ and ‘Gods Of The Earth’. If any of those records pull your cracker (and what are you doing reading Sleeping Shaman if they don’t?), then there’s a good chance you’ll enjoy We Hunt Buffalo’s new four-track release ‘Blood From A Stone’.

Fans of glitter-metal will, naturally, presume that We Hunt Buffalo are paying homage to 80s cock-rock crusaders Cinderella – as their (please God hopefully) final album featured a track named ‘Blood From A Stone’. However, such a presumption would be slightly off the mark. ‘Blood From A Stone’ is in fact named after the first song of the release, and not as an homage to Cinderella at all.

‘Blood From A Stone’ – the track – layers dense fuzz over a Tyrannosaurus-Rex-bollocks-swinging-as-a-metronome rhythm underpinned by Brendan Simpson’s bass power. This is double-barrel music, folks: the hummable, noddable, air-drummable riff is a facsimile of the doobies, dice and dragons music that The Sword are pumping out at a scary rate. A previous review mentioned Tom Morello, and I think that’s pretty far off the mark – Morello doesn’t do riffs this primitive, this visceral. This is a credit to We Hunt Buffalo – I can’t fucking stand Tom Morello’s guitar playing or status as a ‘Modern Metal Icon’ (we all know where the talent was in Rage Against the Machine, and it wasn’t him). Come to think of it, if you’re after a 90s guitar hero, look no further than Steve Turner.

I digress. ‘Cobwebs’, the second cut, has an Alice In Chains vibe going on throughout, mostly owing to the vocal melody, and the squalling call-and-response guitar line that cuts in when the vocal melody drops out. It’s a pounding, grinding take on ‘Beard Rock’, Brandon Carter’s massive-sounding drums clatter and bang away at Sean Kinney’s snail-pace, allowing for the slap and crack of the snare to reverberate around the listeners’ skull. This track sets the standard for the rest of the record, with the most apparent musical comparison being AIC, specifically at their darkest and most soaring. You know, as ‘Dirt’ goes along, it gets more and more star-bound with its sound? The exact kind of spiralling metal they oh-so-successfully disinterred for ‘Black Gives Way To Blue’? Still with me? We Hunt Buffalo make music filled with that kind of dark grunge crashing and navel-gazing stoner riffs (duh, that’s ‘Beard Rock’!).

The third cut, ‘Hometown’, carries on with the downbeat grunge. It lays down a thick, narcotic-slowed groove for vocalist Ryan Forsythe to showcase his urging croon. There’s an undeniably pensive vibe going on in this tune, as ‘hometowns’ represent the most powerful nostalgia and many sizeable regrets to most folks I know. They also represent a feel good vibe if you’re prepared to slow-windmill to tunes like this – just make sure you put your bong down first, you don’t want hot rocks falling on the carpet.

‘Telepathic Eyes’ closes out the record, the longest track on here, with another generous dollop of fuzz and metal emoting. When the drums drop out of the main channel and bang around in the background just after two minutes in, I got hip to the amount of layers and texture going on in their sound. Props go to whoever played that guitar solo too – the fizzing, crunchy tone is perfect for a little string-tickling.

Basically, I recommend it. I recommend it because there will always be a time where you need music like this. For every ‘Pleasure To Kill’ in your collection, you should have a ‘…And The Circus Leaves Town’. (I was listening to ‘Arise!’ by Amebix before listening to this, so I wasn’t necessarily expecting to enjoy WHB’s sweaty stoner gloom. I needn’t have been worried).

Some people turn to Red Fang for a hit of beard (like moi), some turn to Mastodon, Baroness, Torche, Harvey Milk… the list is endless. It won’t be long before We Hunt Buffalo (see what they did there, Bison BC? They’re laughing atcha!) are on many people’s go-to list for an instant toke of ‘Beard Rock’ at its best.