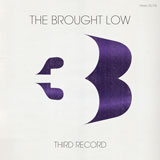 I am a fool, a complete bloody fool!!! That The Brought Low have been on the scene and have previously released two albums, their self titled debut on Tee Pee Records in 2001 and “Right On Time” on Small Stone in 2006 yet I have totally missed out on them until now is both shameful and unforgivable and I only hope I can atone for my sins with this review!!!

Kicking off with the opening one two punch of boogie opener “Old Century” and the Camarosmith/Supersuckers cow punk of “Everybody Loves a Whore” it’s possible that I have been missing out on a potential favourite band right under my snotty nose. It’s a cliché I know but this band does well and truly kick ass!!! The guitars burn the valves til you can almost smell them, the drums batter like a touchy drunk on a Friday night and the bass grinds like a lap dancing crack whore!!!

It isn’t all piss and vinegar, “The Kelly Rose” is as fine a piece of Skynyrd meets Humble Pie southern groove as any band from New York has ever produced. This song reeks of dusty roads, cowboy boots and redneck moonshine partying!!! The high rise concrete jungle is left even further behind as “A thousand Miles Away” breaks out the acoustic and the slide and could well pass for an outtake from “Exile on Main Street” by the Stones with vocalist/guitarist Benjamin Howard Smith sounding like a younger less exaggerated Mick Jagger…a pure porch, whiskey and crickets type of tune!!! Yet another change of pace for “My favourite Waste of Time” which snakes along on a swampy yet restrained blues crawl that the Black Keys would each donate a left nutsack to have written!!!

Skynyrd and The Stones clash again on “Mathew’s Grave” and inject a little funk to the mix while “Blow Out Your Candle” throws in a little Black Crowes and Faces seasoning into the sonic soup, the latter rising along on a muscular stop-start riff that just makes you want to don a denim jacket and strut!!! Strut for all you’re worth!!!! Then what do you know, Eric Oblander from Five Horse Johnson puffs out his chest and blows some mean an’ dirty harp (and by the way Eric we’re long overdue an album…sort it out!!!).

Now southern rock ain’t southern without a ballad and “Last Man Alive” is as close as we’re going to get…a wistful lament that would make Skynyrd proud. I know I’ve mentioned Skynyrd a lot but really they are the benchmark for anyone peddling the sounds of the south and The Brought Low are worthy to be mentioned in comparison with the best of the best. It’s one thing to write a kick ass rocking tune but it takes some real skill to write something more laid back and emotional without steering the tractor into a mighty barn full of cheese!!!

All too quickly “Slow Your Roll” brings things to a close with a jerking groove and some tasty organ giving this an Allman Brothers meets Ted Nugent kind of vibe…now that’s a pairing I’d pay good money to see!!!

9 tracks, all killer and absolutely no filler. It’s good to see a band such as The Brought Low happy to put together a reasonably short and concise album packed with the highest quality music rather than a bloated epic half full of shit. If this fits on one side on a 90 minute cassette then even better…you can play it in the cab of your old Chevy pick up!!! Album of the year? Well we have five months to go yet but this sure has put up a good argument!!!