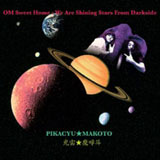 We’re not sure where to begin with this one so let’s start from the outside and work our way in to the contents of the CD. Firstly, this is a side project of Kawabata Makoto, the illusive leader of Japanese pysch-rock lunatics Acid Mothers Temple, and drummer Pikacyhu. Formerly of noise-rock duo Afrirampo, Pikacyu is now the current drummer for Acid Mothers Temple off-shoot Acid Mothers Temple & the Cosmic Inferno. And last but not least, the CD artwork features Makoto and Pikacyu cuddling up to an elephant… in Space. Hopefully that should begin to give you an idea of what you might be able to expect from the pyshedelic duo.

And yet OM Sweet Home: We Are Shining Stars From Darkside starts ominously with a chilling mantra being repeated over and over for two minutes, gradually warping and becoming more distorted before pyschedelic epic “Birth Star” kicks in, in a way that will be familiar to fans of Makoto. It’s actually Pikacyu who takes the lead vocal role however and she manages to make pleasant melodies, chanting and punky shouting coexist in strange chaotic harmony.

In fact this balancing act characterises the entire album – the track listing allows time for punk ditties (“Pop! Spece! Jump!”, “Oscar No Hope” and the Zappa-like “Pigamelan-Magamelan”) to play alongside space oddities like “Birth Star” and “Back to Your House Over the Rainbow”. In between there are moments of calm and contemplation where all that is needed to create a psychedelic atmosphere is Makoto’s beautifully reserved guitar playing and Pikacyu’s lilting voice hovering over the top of it all. The duo are sensitive to the other’s impulses and successfully alter their own playing style to fit the other’s mould. Even better is when they combine to create a sort of hybrid of the two’s styles. An example is “Wild Rise” which features some impressive drumming, combining the psychedelic wig-outs usually more associated with Makoto and the aggressive, shouty punk of Pikacyu’s former bands.

Elsewhere they attempt to evoke “the full of love from the Universe” (according to the presspack) and apparently the love of the Universe is a fucking terrifying thing. “The Ginger Chai”starts beautifully but the repetitive guitar melody soon becomes disconcerting over time and it feels like we’re either staring down a tunnel of madness or we’re listening to the enchanting sound of a parallel universe emanating from a rip in the time-space continuum. As the song fades out a bellowing, deep sound rings out like the call of some space colossus which only adds to the sense of unease. “Oscar No Hope” is 25 seconds of schitzo punk that feels like the duo are exercising their demons onto tape. And remember the ominous chanting I mentioned at the start of the review? Well “OM Marijana FU pt. 2” is the second part and here the eponymous mantra is stretched out for five minutes. Over a manipulated sample of a bagpipe-like instrument. All very strange indeed but incredibly atmospheric, the highest praise for the creators of a bizarre space opera.

“AWA no UTA” is one of the understated highlights of the album – a calm lullaby – while “Back to Your House Over the Rainbow” kind of acts like a companion piece to the similarly long “Birth Star” and gives the album a pleasing symmetry. Finally the relaxed, unwinding “I’m In You” completes the cycle and this peculiar, charming, and at times frightening record comes to a close.

Fans of Makoto and Pikacyu’s previous work won’t be disappointed by OM Sweet Home but for all those who are on the fence make no mistake – this is an oddball release, albeit a strong one. Throughout the album Pikacyu proves to be the perfect companion to Makoto, punctuating his excellent guitar work throughout with some punchy drumming and providing the majority of the audible vocals (Makoto sometimes grumbles underneath all of the chaos). True to the apparent theme of the album, the band manages to blend light and dark, weaving a coherent whole out of the chaos across these thirteen tracks. A Japanese pysch-rock concept album about “the cosmic shaman Pikacyu vs the master of the darkness Makoto?” Yeah, why not? 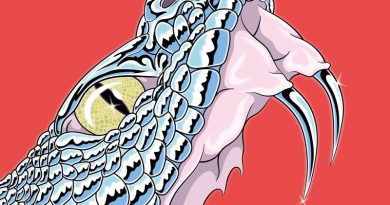