Now, if you read most of my reviews I generally spend time at the more brutal end of the spectrum. But I developed a bit of an affinity for Japanese psych after reading Japrocksampler by Julian Cope, featuring some great bands like Shinki Chen and Flower Travellin’ Band. I then delved deep into Acid Mothers Temple and Boris, so when I heard Mainliner‘s Dual Myths for the first time I thought, ‘this is for me’. It also features two members of Acid Mothers, including main guitarist Kawabata Makoto, providing me a little context. It’s out now through Riot Season.

Opener Blasphemy Hunter is twenty minutes long, unsurprisingly, but to me it never feels that long. Starting with dreamy, spacey vocals while a delicate guitar plucks in the background, it loads up a driving hypnotic riff soaked in fuzz while vocals hove into view and fade out again. It’s incredibly mesmerising, even when the spiralling guitar solo freakouts break through. For me, it brings to mind some of the capitalised BORIS records like Pink or Smile; possessed of that same dynamic energy and joyous abandon of rock tropes. The dynamic shifts into different riff patterns come subtly, a torrent of psychedelic colour haunted by ghostly vocals, that all comes to a crashing, fuzzed out freakout end. And there are three MORE tracks?

Dual Myths is truly a journey, a spiritual totem quest, an exercise in psychedelic possibilities and more…

Hibernator’s Dream is the shortest track here (being a mere eighteen and a half minutes), but it immediately makes an impact with the squalling guitar, trippy vocals and jazzy drums. It presents a much less direct approach than the driving riffs of Blasphemy Hunter; concentrating instead on a more freeform attitude that gradually begins to coalesce into a repetitive groove. At some point I glanced at the album runtime so far during this track. I’m just over half an hour in and it still feels so intriguing. Silver Guck is all driving fuzzed out stoner riffs at the beginning, and it maintains that intoxicating hypnosis that has oozed through each track throughout the cosmic vocals, the undergroove of bass and the shimmering psychedelica of the soloing.

Closing with Dunamist Zero, which is another freakout odyssey of epic proportions, Dual Myths is truly a journey, a spiritual totem quest, an exercise in psychedelic possibilities and more. Somehow, despite its mammoth runtime, I didn’t find myself losing interest, more becoming lost under waves of fuzz and mesmerising madness. That might be Mainliner‘s truest talent on display; that their work is challenging but never alienating. Dual Myths is for those of us who occasionally need to drift into other spaces, other times, and see the world from a different angle. 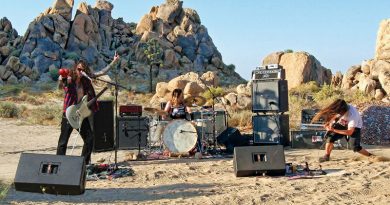