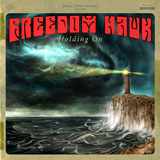 It’s high summer, 1973, you’re making the long drive through the Californian wastelands to pick up a consignment of weed in LA. You stop at a run down gas station in the middle of nowhere and while the attendant fills your tank, washes the dust from the windscreen and checks the oil, you grab a coke and sneak a quick spliff before grinding the used butt into the sand. Before long you’re back on that lonely highway with nothing but the radio for company but you’re getting sick of hearing “Stairway To Heaven” and you’ve never really got The Eagles so you fumble through the 8 tracks stashed in the glove box and come across one you’ve never heard before…Freedom Hawk…so you stick it on.

Yes folks, Freedom Hawk lay down some syrupy grooves that come rising from the ashes of days gone by. More so than the majority of Small Stone’s current roster, Freedom Hawk look to the 70’s to fuel their fuzzy tones with a captivating vintage vibe rather than the usual stoner clichés. If anything it sounds like these guys have been getting some direct blow backs from Sabbath themselves, particularly as guitarist T. R. Morton’s voice occupies that spectral acidic zone that Ozzy set up home in during his hey day.

Tracks such as “Living For Days” and “Her Addiction” blast buy in a sulphate addled blur, the latter tipping a nod to some prime Judas Priest along the way complete with twin guitar harmonies. Elsewhere “Edge Of Destiny” pulls off a more epic sound that, dare I say it, has shades of Wolfmother in its grandiose tapestry. “Zelda” is a smoky “Planet Caravan” style instrumental that leads into the rich and harmonious “Nomad”. Here Morton’s vocal is prime Ozzy but the track has a more restrained groove that shows off some very tasty guitar wailing. I’m going to stick my neck out and note a touch of UFO here…and if more bands took UFO as an influence the world would be a better place!!!

“Magic Lady” has a definite Sabbath vibe but Freedom Hawk have the ability to craft some killer choruses, something that Sabbath rarely did…you don’t believe me, go back and listen and try to find the choruses in Sabbath’s tunes!!! This is a track that wouldn’t sound at all out of place on any classic rock radio show blending slick melodies with muscular riffing.

If the funky grooves that herald the arrival of “Bandito” don’t have you grinning from ear to ear and moving your ass then you are moments away from needing resuscitation!!! When the riff kicks in then the beer’s going flying on this little sucker!!! Just as you’ve got your groove on, “Flat Tire” comes on sounding like it’s going to burst into Uriah Heep’s “Easy Livin’” complete with organ…it doesn’t but all the same this is kind of like going on a drunken rampage in a Camaro at full tilt!!!

Unlike a lot of so called stoner bands, Freedom Hawk show a classic knack for writing economical, punchy and most importantly catchy songs as opposed to bunches of drawn out riffs. They know the power of dynamics in a song…when to pick it up and drop it down a notch or two…and also know how to hold a song back from outstaying its welcome. That skill married up with a tight, warm production that boasts a smoking, vintage guitar tone…you can almost smell the valves burning…makes for yet another top notch release from the Small Stone label…can they really do no wrong???