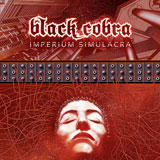 Just as tick precedes tock, as clip leads clop and as bish paves the way for bosh, so too does the announcement of a new Black Cobra album herald the thought of your brain being pummelled back to where it rightly belongs: into complete heavy metal abandon. Now bizarrely approaching veteran status since their formation back in 2001 (yep, that’s fifteen years ago!), this duo with ex-Cavity, -16- and Acid King credentials have surely already carved their names into sludge-metal’s tombstone of elite royalty with that trademark blend of Jason Landrian’s buzzsaw riffage and wrathfully-barked vocals, coupled with Rafa Martinez’s complex heroics behind the kit. From that dirty and delicious Bestial debut, through to the painful exercise in torment of Feather And Stone and the calculated, but deadly Chronomega record, the gruesome twosome’s sound and template had rarely wavered. But it was the sonically devastating Invernal release in 2011 that raised Black Cobra’s bar higher than ever before; with its laser-precision Kurt Ballou production, a new penchant for allowing the grandiose into the furious and some torturous lyrical imagery revolving around the icy exploration tales of Ernest Shackleton. They may have made us wait a full five years for Invernal’s successor, but Imperium Simulacra is ready show us that there’s still plenty of coiled venom in the Black Cobra yet.

Challenger Deep leaps in head first right where Invernal left off with Rafa setting a furious pace and pounding the way forward from behind the drums as Landrian shifts through the gears with a rhythm and a structure that reminds me of the more set-in-stone format of those Chronomega bangers. Right from the early days of Bestial and Feather And Stone, Black Cobra have come to demonstrate that whilst they might appear to be simply furious, scuzzy and all-guns blazing riffians, their compositions are fucking astounding metal-laced arrangements with key changes, giant bass drops and almost-hummable choruses atop Jason’s near-permanent E-string chug.

Both the title track, Imperium Simulacra, and Eye Among The Blind ramp up the intensity and the pace as Martinez’s double-kicks approach warp speed and Landrian’s buzzing strings rattle through the underground. The album itself is loosely themed around the idea of the invisible vision, or the simulation if you like, of human control, set against a backdrop of the rise of technology and its impact on human behaviour and governmental suppression. As Landrian roars: “Take down the unreal! Exterminate! Falling into the void! Reformulate!” in a somehow audible fashion over his barrelling guitar riffs slamming through an amp-rig the size of Saturn, you get the genuine punch-in-the-gut, Matrix-style feeling that our race, our planet and the very existence of absolutely everything is completely fucked beyond any form of repair.

As flawless as the Bay Area pair are at their thundering, no-holds-barred speed metal, Black Cobra are at their most potent, in my opinion, when they drop down a gear in between proceedings into that smouldering cadence that allows them to breathe true life into the beasts of steel they muster from below. This trend is particularly noticeable on album highlight Fathoms Below and the cold and colossal The Messenger, which reaches back into the Invernal locker for yet another mid-paced stonker of a riff to piledrive into your diseased consciousness before chugging you over the edge into headbanging fury. It’s the aforementioned Fathoms Below however that should take the acclaim as one of the finest pieces Black Cobra have yet committed to tape. Beginning life with a gentle bass-riff and Rafa’s commanding war toms, it circles and tightens its grip on your nodding head before frankly exploding into one of two mind-melting riffs that are scything enough to take your skull clean off your shoulders. The song twists and turns over the course of eight minutes, leaving no gun in the ‘Cobra arsenal un-fired as Martinez and Landrian cover everything from the forceful thrashing of High On Fire to the harrowing bleakness of Noothgrush’s slow crawl through the sewers towards your untimely demise.

Elsewhere you have the short-sharp shock of Obsolete’s blastbeats racing you through the darkness and the solid, roaring intensity of Dark Shine to gorge on and remind yourself of simply how frighteningly rapid and talented these two brutality butchers really are. Closing out with the classic Black Cobra-styled, mechanically-recovered riffing of Sentinel (Infinite Observer) which thrusts a knife into your back and twists beyond all mercy, Landrian and Martinez smash their way out of the backdoor of your own sanity and off once again into the night.

Whereas Invernal was a lightning bolt listen that had me cemented to my seat on its first spin (it was virtually the only album I listened to for the first three months when I got hold of it), Imperium Simulacra is more of a growling grower; a back-to-bruising-business return for the undisputed knights of ferocious sludge metal. The quality of input energy and the resulting all-round output song quality is arguably better than on Invernal, but there’s perhaps less in the way of stunning thematics or strong story-telling thread linking Imperium Simulacra’s eight (nine if you count the enjoyable, yet rhythmically separate bonus track Technical Demise) threats on your physical state. Although in some ways I dearly hope we don’t have to wait another five years before its Cobra Time (I really must get that copyrighted someday…) once again, on the other hand I have calculated that it’s approximately that same amount of time it’ll take my ears to recover from the destructive might of Imperium Simulacra. Buy it now and prepare to lose your shit.