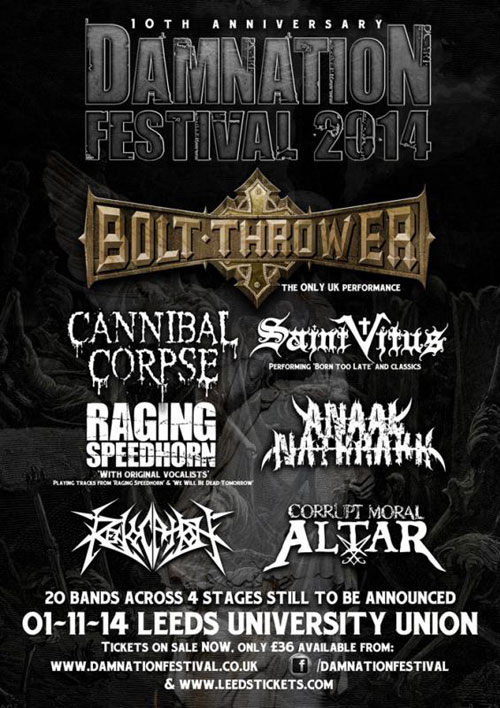 They’ll be joined by the bipolar sludge/grind purveyors CORRUPT MORAL ALTAR on the bill which will sprawl across four stages at Leeds University Union on Saturday, November 1st 2014.

Bolt Thrower‘s only UK show, a Cannibal Corpse headline set, St Vitus playing ‘Born Too Late‘ in full and the original vocalists of Raging Speedhorn reuniting to play classics from their first two albums complete the line-up to date, with a further 20 bands still to be announced for the 10th anniversary celebrations.

ANAAL NATHRAKH, who were one of the most requested bands to return to Damnation, promised to bring the party poppers… and “savage annihilation“.

They said: “We were both appreciative and proud to hear we were one of the most requested bands to return to Damnation. Thanks. And given that, and our history with what has to be the best indoor festival going, it seems particularly appropriate that it’s the one where Damnation celebrates its 10th anniversary which finally has us back on the bill. Here’s to wrack, ruin, and savage annihilation.”

REVOCATION added: “We are beyond stoked to announce that we’ll be playing this year’s Damnation Festival. This fest is going to be epic and it will be a real honour to share the stage with death metal legends Bolt Thrower!”

And CORRUPT MORAL ALTAR said: “We are honoured to be asked to play Damnation Festival this year, especially with it being the festival’s 10th anniversary. Let’s smash!”