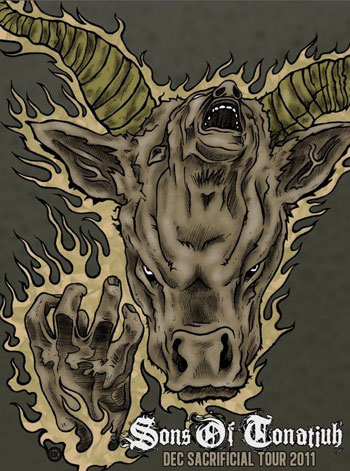 Atlanta-based sludge miscreants SONS OF TONATIUH (pronounced “tahn-ah-tea-ah”) have been slowly building steam since 2008. The band — drummer Tim Genius, guitarist/vocalist Dan Caycedo and bassist/vocalist Mike Tunno — released their debut via Michigan’s Hyodro-Phonic Records in early 2011 and are currently putting the finishing touches on the follow-up. The as-yet-untitled second full-length, recorded by Kyle Spence of Harvey Milk, should see the light of day in early Spring of 2012. In the meantime, the band will be blowing speakers throughout the coming months on a select number of live dates set to commence on December 14, 2011 in Chattanooga, Tennessee.

Commented guitarist/vocalist Dan Caycedo: “By the grace of our dead ancestors SONS… will be clearing a path through the cornfields of the Midwest in hopes of destroying every Evangelical superficial mindset that has been forging this country together since the 1400s…”

You can also read Mark’s review of their debut album HERE.