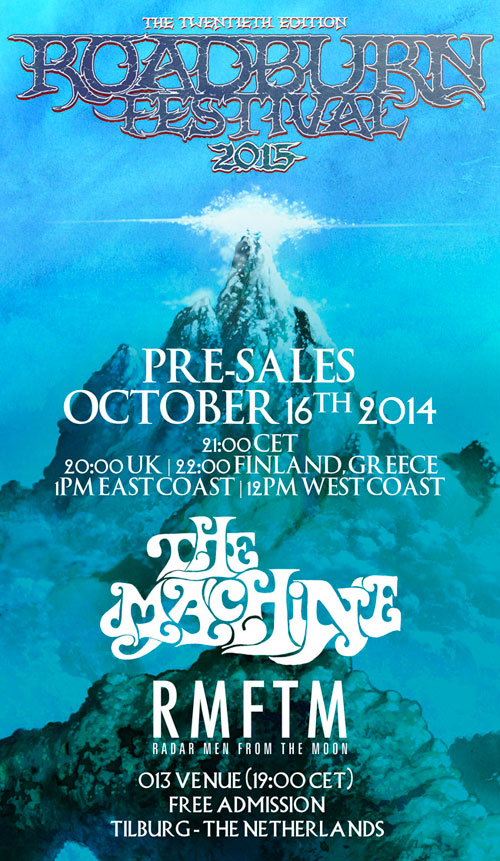 Walter & co are excited to announce that tickets for the 20th edition of Roadburn Festival, set for April 9 – 12 at the 013 venue in Tilburg, The Netherlands, will go on sale on Today! Set your alarm and get ready to score your tickets at 21:00 CET!

The majority of Roadburners live outside The Netherlands, which is why ticket pre-sales will start at 21:00 CET. This should be convenient for most time zones. Apologies to their friends in Oceania who will have to wake up early (or just stay up late)!

If you encountered problems trying to purchase Roadburn Festival 2015 tickets using your credit card, do not despair. You can pay for the tickets via bank transfer. They will help you complete the transaction. Please get in touch through roadburn (at) 013 (dot) nl.

Attention online buyers: be sure to create your Ticketmaster.nl account in advance. That way you can save your information and avoid extra time-consuming steps when you log on to purchase your tickets when they go on sale.

For everyone in the Netherlands and Belgium: they are aware that your local ticket outlets will not be open when pre-sales start, which is why they are throwing another pre-sales party at the 013 venue in Tilburg (NL). From 19:00 CET – 20:30 CET you will be able to purchase a maximum of four paper tickets for Roadburn Festival 2015. Guaranteed!

In addition to making it easy to get tickets, the pre-sales party is going to be a blast! This year, they have invited The Machine and Radar Men From The Moon to provide the soundtrack.

No strangers to Roadburn Festival, Holland’s very own The Machine have been offering the finest, hard-hitting stonerrock jams since 2007; with four albums under their belt, and mesmerising club and festival appearances, The Machine are at the fore of the European heavy psych rock scene.

Eindhoven based cosmonauts Radar Men from the Moon have been making waves with their sophomore album, Strange Wave Galore, released through Fuzz Club Records.  The band’s approach on the psychedelic rock scene is rather broad. By taking different genres into account such as shoegaze, neo-psych, space and noise rock, they take off in an interstellar exploration of new sounds.

The live music part of the evening starts at 20:30 CET.

Roadburn’s artistic director/promoter Walter Hoeijmakers will be on hand to share the latest festival updates, too.