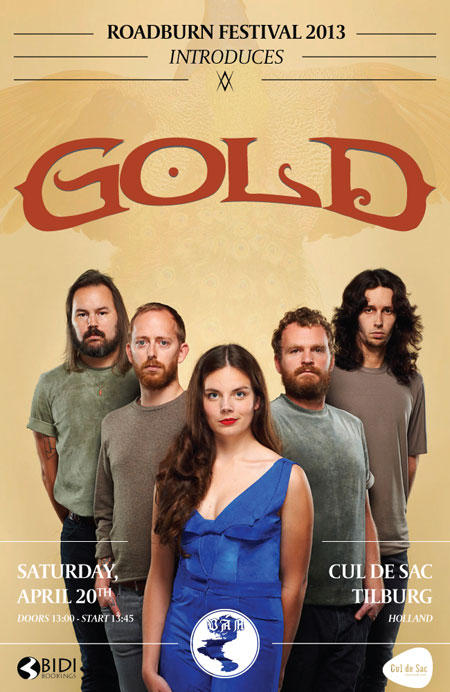 Walter & Co are very excited to announce the fourth installment of Roadburn Festival Introduces. The idea is to present promising Dutch bands that have their own vibe while at the same time possess that certain Roadburn flair, whether it’s a psychedelic slant, roots in the heavy 70s or an insatiable need to worship the occult.

This year they will offer GOLD the opportunity to connect with the international Roadburn community during an intimate show at the Cul de Sac on Saturday April 20th in Tilburg, Holland. Doors open 1pm and the show starts at 1:45pm.

GOLD is the brainchild of guitarist Thomas Sciarone (ex-The Devil’s Blood) and singer Milena Eva. The band’s debut album, Interbellum, was triumphantly released on German cult label Ván Records in December 2012 and runs the gamut from acoustic to folk, progressive 60s pop and 1975 hard rock. The songs are loosely based on a concept involving the decline of civilisation and the end of days.

The band’s not so secret weapon is Milena Eva, who dominates in the same way Grace Slick did on those Jefferson Airplane albums in the 1960s: whether Milena is mournful, tender, extolling the virtues of love or raging at the divine, the band weaves their luscious melodies and hook-laden riffs around her breathtaking vocal harmonies, ultimately creating a dynamic, varied and adventurous backdrop against which she can shine. Add to that a sonically fresh and modern scope, and the only conclusion we can reach is that GOLD has something unique and interesting to offer Roadburners.

The Netherlands has been long overdue for a band to put the lowlands back on the international rock map. We’re thrilled to see GOLD rise to the occasion!