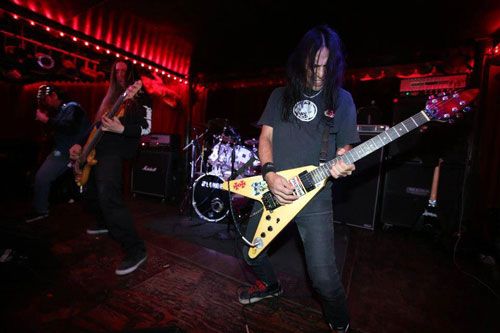 Burly, Texan doom rockers LAS CRUCES have signed to California’s Ripple Music for a world-wide onslaught of heavy rock. The group, who just completed a standout performance at the infamous Doom in June Festival, have already started writing and making demos and will enter an undisclosed studio this summer to record their Ripple Music debut and follow up to 2010’s Dusk.

Shortly after forming, LAS CRUCES began touring the Texas scene, gaining widespread recognition and the interest of John Perez, guitarist of Solitude Aeturnus & owner of Brainticket Records, thus forging the Debut release, S.O.L. After a year of touring Texas and the Southern States, LAS CRUCES decided to re-enter the studio. Driven by the hunger and sharpness of old school metal along with the power melodies of 70s rock, LAS CRUCES released their skull-crushing follow-up, 1998’s Ringmaster. LAS CRUCES was invited to perform at the first-annual Stoner Hands of Doom Fest in August of 1999 and have been asked to perform regularly at many heavy rock festivals in North America ever since.

Over the years LAS CRUCES has gone through line-up changes and rumors of break-up. However, these things have not foiled the bands ideology. The band was honored to be featured in The Encyclopedia of Heavy Metal by author Daniel Bukszpan in 2003 as well as in the publication Rockdetector Music Presents: Stoner, Doom and Gothic Metal series published in 2003.

Described as “a journey into a parallel sonic universe of all that is heavy,” their songs are sprinkled mighty, bludgeoning riffs; barn-burning guitar work, and apocalyptic vocals that melt listener’s brains. LAS CRUCES is poised to begin the metal onslaught for the masses as they prepare to record their fourth full-length album.

“We are absolutely thrilled to partner with Ripple Music to unleash the fourth Las Cruces record upon the underground,” comments Trevino. “Many of our friends and contemporaries have passed through the ranks and we’re thrilled to march onward into the streets with them at our side.”