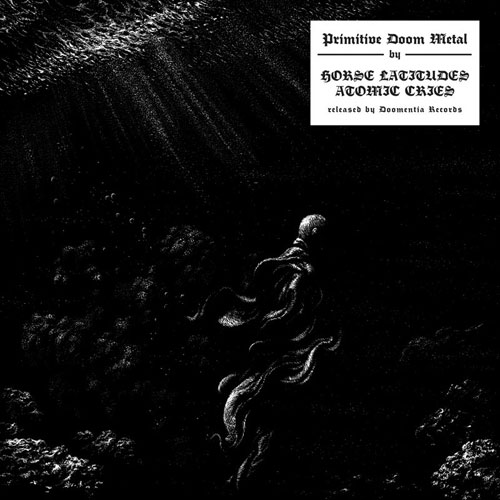 Sometimes, a few well-selected words tell more than lengthy and boring speeches… That this new split has the words ‘primitive doom metal’ emblazoned in capital letters on its flipside is obviously no coincidence but actually a statement of intent from both bands involved here.

Loyal Doomentia Records followers should know by now the Finnish trio HORSE LATITUDES and their two-basses-but-no-guitar attack. If you think that ‘Black Soil’ released last June was their heaviest offering yet, just wait until you’ll hear ‘Drowned Current’ as here, they’ve outdone themselves by adding an organ a mini-moog to their arsenal, allowing them to dive even deeper unto the darkness for that nearly twelve minute dive.

Picking up the gauntlet and determined not to let themselves be outdone, relative newcomers ATOMIC CRIES are an international two-man unit with one foot in the US (Andy Lippoldt from Persistence In Mourning) and the other in Europe. Proudly bowing down at Saint Vitus’ altar, they actually are the originators of the ‘primitive doom metal’ tag. So if you haven’t heard their debut EP from last year (released through Svart Records), get ready for two tracks of ‘caveman music’ as they’re saying themselves. They are the purest form of doom; reincarnated, undiluted by gimmicks or other ill-advised additions. Let there be doom indeed…

This ‘primitive doom metal’ slab of wax features jaw-dropping artwork by Timo Ketola and will be released on 12” vinyl via Doomentia Records on 12th April 2014, the date which also coincides with HORSE LATITUDES performance at this year’s Roadburn Festival in Tilburg, The Netherlands, where the band will also have copies on sale.

You can also stream the HORSE LATITUDES side, the 12 minute track ‘Drowned Current’, below: