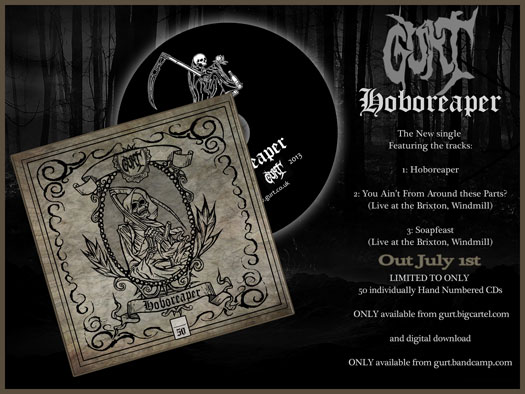 GURT are currently beavering away on their on going mission to encourage the world to groove to a sludgier stomp and create their first full length release and its looking like this will be with you all in the early parts of 2014. In the mean time they think it would be polite to show you how this work is going in the form of a brand new single ‘Hoboreaper’.

This track was originally planned for release on a split but the project has been delayed and it was decided that the world should not have to wait for an example of how the GURT sound is evolving so this new song has been coupled with 2 recent live tracks that have been professionally recorded by Paul Hollinsworth (of paulofsound) at the ‘When Planets Collide – Winter Warmer Weekender’ to bring you a single that should keep the rabid GURT fans happy for the time being.

Featuring new Artwork from Front man Gareth Kelly (GrowthsBrainDribbles) Mixed and Mastered by our long time collaborator Nick Kinnish previously of Serafina Studios (whom has also worked on the likes of Dopefight, Johnny Truant, Architects and War Wolf) This CD single and digital release shall be available from July 1st and is now up for pre-order at gurt.bigcartel.com.

And check out the video below for a trailer to the single.