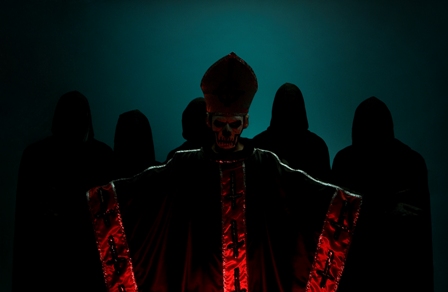 The cover artwork for “Infestissumam“, the sophomore album from the mysterious Swedish buzz band GHOST, can be seen below. The CD will be released on April 9 via Loma Vista Recordings. 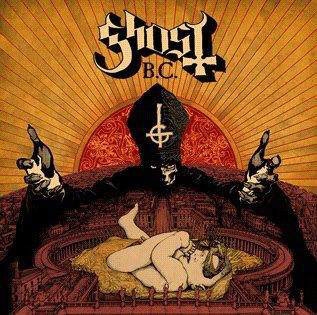 The “Secular Haze” video can be seen below. The clip was filmed by Amir Chamdin in the band’s hometown of Linköping.

GHOST was recently forced to modify its name in the U.S. to GHOST B.C. for “legal reasons.”

Papa Emeritus II recently emerged on the 100th issue of Decibel magazine for an extensive feature detailing the making of the forthcoming “Infestissumam” in which a nameless ghoul declared, “Regardless of your religious beliefs, we like to trigger the imagination of the listener so they can become a devout burner in Hell or a keen participant of devil worship for at least an hour or two. That’s the GHOST experience.” Decibel editor-in-chief Albert Mudrian said, “For the cover of our 100th issue, we wanted to spotlight a band that embodies the ideals of the magazine: theatricality, black humor, love for both the past and present of extreme music. GHOST meets and exceeds all of those criteria, and we couldn’t be more excited to reveal the exclusive story of the making of their sophomore album.” 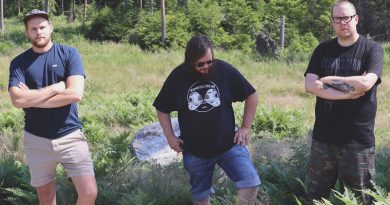 Witch Hunter Records, Gurt, Limb & Split Roast – What Could It All Mean!!??