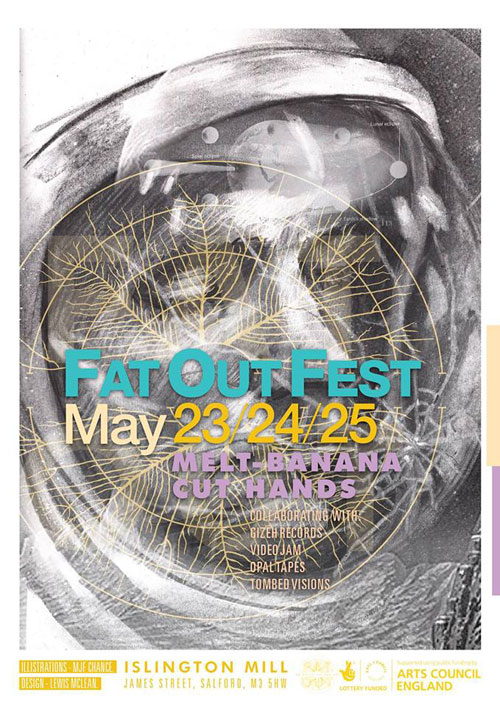 Fat Out Fest – hosted and curated by Salford’s own Fat Out Til You Pass Out, avant-promoters extraordinaire, and friends – returns to Islington Mill, Salford this May 23rd; a three day festival over the Bank Holiday, celebrating independent creativity, blurring the boundaries between music, performance, art and film in an interactive and multi-disciplinary experience. With thanks to the Arts Council, the festival has been awarded a Grant for the Arts.

It will be their most collaborative effort to date, with four handpicked collectives chosen to curate two further stages, making this edition the most diverse yet. Opal Tapes, Video Jam, Gizeh Records and Tombed Visions will be curating their own dedicated spaces throughout the weekender, as well as a fully interactive sound installation by Action Beat and collaboration between visual artist KHOM and local musicians.

Confirmed to headline the main stage over the bank holiday weekend include the legendary Melt Banana and critically acclaimed Cut Hands; a mere glimpse at what promises to be their most enthralling line up to date.

Fat Out curate the Club Space:

Yoga Room curated by Opal Tapes on Saturday 24th May
Stephen Bishop – aka Basic House – is the founder of Opal Tapes, a label that has been on a stratospheric rise in the collective conscious of the dancefloors wet arts in the past two years. Bishops curatorial excellence has received high praise from Resident Advisor, Fact Magazine, Boomkat and the Boiler Room, not discounting a legion of obsessive listeners. It easy to see why; the likes of Huerco S, Wanda Group, MCMXCI and 1991 have all recorded for the label, folding into a singular roster of game changing musicians. Using the proponents of dance music as site for experimentation, each Opal Tapes release inhabits a dazzling array of austere influences and palpable textures (from dub to musique concrete), smudging these boundaries into entirely new sites of sonic art and ferric beauty that massages the head as well as the hips. Needless to say, Mr Bishop stage will surely have one of the most anticipated line-ups of the entire festival.”

Fifth Floor curated by Video Jam on Saturday 25th May
Described as “one of Manchester’s most innovative nights”, Video Jam is an ongoing series of unique experimental events that seek to explore and re-examine the relationship between moving image and sound. We collect together a programme of short, silent films of any genre, by professionals and amateurs alike and pair each with a different musician or sound artist with the intention of composing an original score. This ‘blind collaboration’ culminates in an event which screens every film with its own accompaniment performed live

Yoga Room curated by Tombed Visions on Sunday 25th May
Tombed Visions is a Manchester based cassette label specialising in sound art, ambient music, experimental electronics and improvisational music. For the labels stage at this year’s Fat Out Fest, founder David McLean has handpicked a vast array of likeminded musicians, both local and national, inviting them to collaborate with each other in a series of exclusive and never before seen concerts. The musicians have been specifically grouped together to create an arresting and engaging programme of musical events which will be all be recorded for release and aims to offer a living, breathing representation of the labels aspirations. From mind bending improv to calculated, electro-acoustic experiments, Tombed Visions’ stage aims to showcase the fringes of contemporary independent music.

Fifth Floor curated by Gizeh Records on Sunday 25th May
The Eternal Return Arkestra of Gizeh – Gizeh Records curates a four hour continual improvised performance featuring up to 20 musicians at one time in the haunting and desolate loft space at Islington Mill. Each hour will be lead by a different group or artist, varying the theme from where the journey begins. The performers will gather to form a circle in which the audience is invited to come inside and experience the individual elements of sound that will make the whole.

Tickets are just £30 for the entire weekend, available through Fat Out’s webstore HERE, or via We Got Tickets HERE and Skiddle HERE, there’s also a Facebook Event set up HERE.

Volunteer Your Ears To The Samsara Blues Experiment At DesertFest 2014