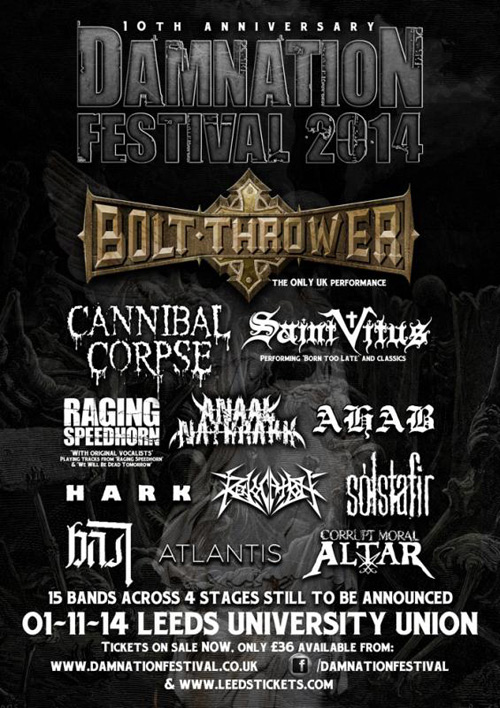 German doom titans, AHAB, and Icelandic progressive metal outfit, SÓLSTAFIR, are the latest names to be added to the tenth edition of Damnation Festival.

The headline set will be an exclusive UK performance by AHAB and the first the band have played outside London, while SÓLSTAFIR arrive in for their debut UK festival show in support of their stunning new album Otta.

AHAB said: “We’re delighted to celebrate our 10-year anniversary with the only Ahab UK Show 2014 at Damnation Festival. Headlining the doom stage is an honour and a great birthday present for us!”

SÓLSTAFIR revealed they are “stoked” to be part of Damnation’s tenth anniversary show: “We picked Damnation Festival for our debut UK festival performance, after countless offers from other UK festival promoters, so what better way to celebrate Damnation’s 10th anniversary than joining us in Leeds? And you even get to see Bolt Thrower. We’re stoked”

JimBob of HARK added: “Damnation has to be one the UK’s best festivals, so we’re over the moon to be added to such a great lineup. We’ve been taking ‘Crystalline’ out all across Europe since its release, and can’t wait to show the amazing Damnation crowd what we’ve got. This will be a great day.”

And Glison Hetinga of ATLANTIS said: “Playing Damnation Festival is something that we as a band always wanted to do. So being invited for this year’s edition is an great honour.”

BAST are also ad looking forward to playing Leeds for the first time.

The band said: “As patrons and fans of Damnation in previous years, it’s with particular honour and excitement that our inaugural performance in Leeds be at the festival’s 10th anniversary – being part of a line-up that’s already promising to be one of the most memorable in recent times.”

The latest additions bolster a stunning four-stage bill already brimming with some of finest music on the planet, including an exclusive Bolt Thrower UK show, Cannibal Corpse headline set, St Vitus playing ‘Born Too Late’ in full and the much-anticipated return of Anaal Nathrakh and Raging Speedhorn.

With ticket sales going at a rate not witnessed since 2008, Damnation Festival’s tenth anniversary promises to be an event to remember.

THE COSMIC DEAD: UK & Euro Tour Kicks Off On Monday!

APE MACHINE Gearing Up For US West Coast Tour Dates