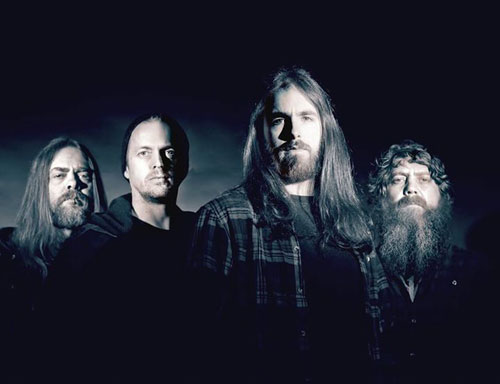 Beneath the soil of a Welsh valley a heavy metal life-force regained strength: rising from the ashes of psychedelic doom merchants Acrimony, SIGIRIYA was born. Not wanting the limitations of reforming a project long dead to them, SIGIRIYA come from the earthy depths, bringing hefty, tremor-inducing sonics that pay homage to the riff. In 2012, the prestigious Church Within Records (Germany) released the full length album, ‘Return To Earth’ with much critical acclaim.

Time served in the likes of Acrimony, Iron Monkey, Dukes of Nothing, Black Eye Riot, The Nine, Suns of Thunder and Tabularasa have forged their thick output, giving the foursome a more dynamic, meaner, leaner, earthier approach, which has developed an intense dirty sound.

Taking their name from the mystic ‘throat of the lion’ rock in Sri Lanka, their rumble has been moving the Black Mountains of their homeland and they’ve been moving the tectonic plates of the earth via shows and festivals across Europe and the UK including the prestigious Roadburn Festival, DesertFest, Stoned From the Underground among others…

The new album ‘Darkness Died Today’ was recorded live onto analogue tape at Sonic One with Tim Hamill. The mixing was done by Andrew Schneider (Shrinebuilder, Scissorfight, Big Business…) in New York and finally mastering with Richard Whittaker in London. The new album builds on the sonic foundation of ‘Return To Earth’ and soars to even greater heights with the addition of new vocalist Matt ‘Pipes’ Williams.

On signing with Candlelight, SIGIRIYA commented: “Our intention has always been to spread the riff as far and wide as possible, and we’re honoured to be teaming up with Candlelight for the new album. The diversity of great bands on the label and the good relationship we have with the people there make it a natural home for us.”

Darren Toms, head of A&R for Candlelight Records had this to add: “I have known the guys in the band for nearly 20 years and watched them grow in the different bands they have been associated with, Acrimony being one of my favourite and underrated bands of all time, who carved something special into the UK doom scene in the early to late ‘90s I am thrilled to welcome them to the label.”

Listen to ‘Tribe Of The Old Oak’ from the forthcoming album ‘Darkness Died Today’ below: