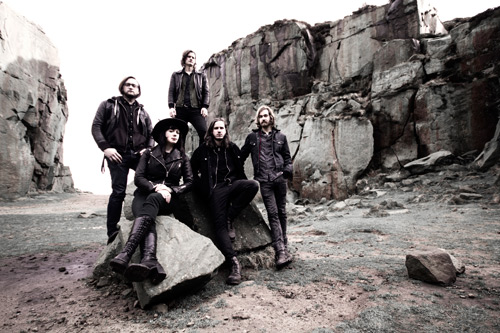 An onslaught of monumental riff sorcery and serpentine grace, BLACK MOTH rose from the Leeds underground scene at the end of the last decade, indulging their love for both Sabbath sulphur and Stooges squalor. Their debut ‘The Killing Jar’, which was released in 2011, effortlessly transcended its influences to arrive at a nefarious and turbulent brew, equal parts horror movie atmosphere, thunderous drive and maverick spark, with Harriet Bevan’s biting and beguiling voice leading the charge.

Expanded from their original four-piece to five, this full-on proposition took to the road, touring with Turbowolf, not to mention laying waste to festivals from Download, to Reading/Leeds, to Desertfest. A limited single on Too Pure, ‘Savage Dancer/Tree Of Woe‘ showcased an addictive stomp that was as much in service of Bolan as Beelzebub. Yet BLACK MOTH weren’t satisfied, and amidst a turbulent and tumultuous 2013, they set about transcending their original paradigm, fuelled by school-of-hard-knocks malice, and with the fire of their fortitude as vivid as the glow of the tubes in their ampstacks.

The result, ‘Condemned To Hope‘, produced like their first by Jim Sclavunos (Grinderman, Nick Cave & the Bad Seeds, The Cramps) takes their kaleidoscopic heaviosity and sepulchral style to a whole new plateau of riff-driven dementia. It’s an album of fearsome drive and clandestine twists, skilfully sidestepping the cliché and heavy-handedness of delivery that often seems fit to destroy contemporary heavy rock ‘n’ roll from the inside out.

There’s a surfeit of fiery diabolism to be had here, as on the opening ‘Tumbleweave‘, which blends a Dave Wyndorf-esque wry absurdity on the lyrical front with a woozy third-eye landslide of a riff-monster, or ‘The Undead King Of Rock N’ Roll‘, a keen-eyed deconstruction of the more tiresome traits of the rock mythos to a gloriously debauched blast of Acid King style dirge-dementia. Yet there’s both subtlety and strength in depth too, as the infectious melodic suss of ‘Set Yourself Alight‘ and ‘Stinkhorn‘, whose dustblown expanses bring to mind the primal atmosphere of ‘To Bring You My Love‘ era PJ Harvey, will testify.

A turbulent brew with just as much 60s garage rock bite, head-spinning psychedelia and ‘1991-The-Year-That-Punk-Rock‘ grit to offer as Vinum Sabbathi riffage. ‘Condemned To Hope‘ is where BLACK MOTH truly render themselves a glimmering presence in the firmament of 21st century rock. A band just as comfortable sharing the Temples festival bill with the likes of Electric Wizard and Neurosis as they are alongside Nick Cave, Iggy Pop and Deborah Harry on the forthcoming Jeffrey Lee Pierce Sessions album ‘Axels And Sockets‘, and having already laid waste to Europe in support of Uncle Acid And & Deadbeats, this uniquely potent and poleaxing proposition are set to spread their wings to oblivion and beyond.

‘Room 13’ the new BLACK MOTH single poses a grim, threatening uneasiness as it heaves, unrelenting through its themes of paranoia, hallucination and crushing night terrors. This can only indicate that with their second album looming, this is a band that is reaching new levels of trouble.

Perfectly illustrating the inherent dread, we also present the new official BLACK MOTH video from Orillo Productions. A haunting offering with an unmistakably Yorkshire brand of Brit Horror grit, the video was shot in recently unlocked servants quarters of a 200 year old haunted mansion as the band penetrate a young girl’s darkest nightmares, check it out below:

‘Room 13’ is available to buy as a download on June 30th but that’s not all, you can digitally pre order the whole new album now from iTunes for a limited time at the special price of £4.99 HERE.

BLACK MOTH will be doing a launch gig at London’s Barfly on the 3rd July. A John Kennedy XFM Xposure night that’ll be recorded for broadcast on John’s show, it promises to be a heavy session indeed with support from Holy Mountain and NHS label mates LIMB..

‘Condemned To Hope‘ will be released via New Heavy Sounds on 15th September 2014.