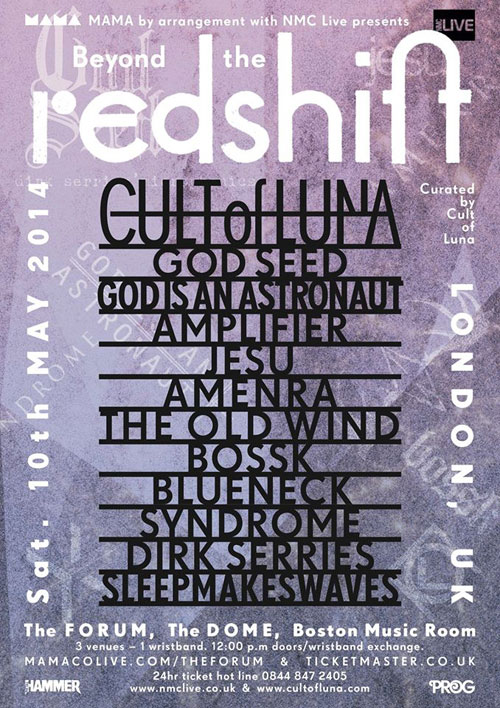 Saturday 10th May 2014 will see London host an audio-visual experience, Beyond The Redshift is built around a concept and line up curated and headlined by Sweden’s CULT OF LUNA. An artist who for over a decade has helped mould and expand the notion of what heavy music can be, the diverse musicians they have put together should come as no surprise to those familiar with their music.

The second wave of bands announced is lead by one of the world’s most intense, musically – and visually – inventive post-rock bands: GOD IS AN ASTRONAUT. Joining them in The Forum will be the multifarious heavy layers of Justin Broadrick’s post-metal beast JESU. The Swedish north will blow through in the form of the combined might of Breach and The Ocean: a UK exclusive for THE OLD WIND. Veering perhaps further to the leftfield, we have Amenra member Matthieu Vandekerckhove’s ambient and experimental SYNDROME project. Finally, following their European tour with 65daysofstatic, Australia’s SLEEPMAKESWAVES complete the second band announcement.

The current line up for Beyond The Redshift is as follows:

+ 9 more artists to be announced.

The CULT OF LUNA curated Beyond The Redshift takes place on Saturday 10th May 2014 across 3 London venues; The Forum, The Dome & Boston Music Room.

Tickets are priced at £30 + booking fee and are available from Ticketmaster HERE.