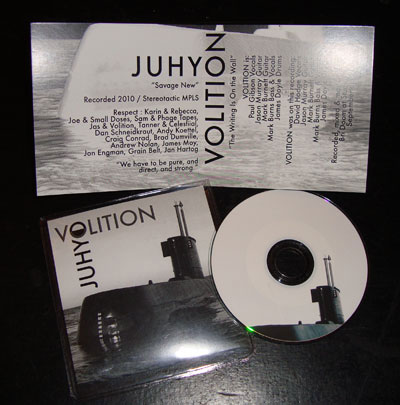 Small Doses have released a Split Cassette and 3″ CDR from Volition & Juhyo, the press release can be read below…

An interesting pairing that brings together two different genres from two different parts of the world. Volition, hailing from Furness, UK, bring their own unique take on doom on their part of the split. Minneapolis’ Juhyo has a tightly composed vision to their noise. The two sides acts, despite their differences come together wuite well on this split. Each provides a single 10 minute track. Two versions: cassette and 3″ cdr, each containing the same material, and each in an edition of 100 copies.

Volition guitarist Jas also commented on the release…
“We are pleased to finally announce the release of our split cassette/3″ CDr with the mighty Juhyo.  I’ve been a fan of the band for a long time now so it truly is an honour to share a release.  Many thanks to Joe from Small Doses for releasing it.”