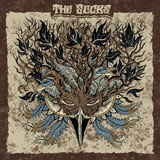 It can’t have escaped your notice that retro, 70’s flavoured rock is very much de rigueur right now and the influx of bands aping the vintage tones of bands such as Deep Purple, Budgie, and Sabbath…etc is almost overwhelming. It was only a matter of time before Small Stone Records found their own contribution to the scene. Did they go to Scandinavia to find their band? An area so overpopulated with such bands that there is now a national shortage of patchouli and velvet!!! No, Small Stone went to the unlikely source of Lyon in France…and it’s probably just as well for them that they did as French bands have an innate ability to take hold of a current trend and add their own spin.

For the most part The Socks follow many of the “rules of retro”; the guitar sounds seem to be provided courtesy of dusty old, pawn shop amps, the riffs have the requisite level of blues and jazz chops apropos of the era and the production is suitably reverb ridden as to give it that live feel. Where The Socks fare better than most of their contemporaries is the energy with which they present their songs. Lead guitarist and vocalist Julien Meret possesses a voice that contains a raw edge and aggression that adds a sense of conviction missing in so many similar bands. Likewise the guys know how to get their heads down and rock the fuck out when the need arises…and the need seems to arise fairly frequently it would seem. Songs such as ‘Some Kind Of Sorcery’ and ‘New Kings’ pelt along with a frantic rush that raises the heartbeat and gets a sweat going.

Nicholas Baud on rhythm guitar, backing vocals and keyboards is also a key player here. There is no danger of the band sounding thin as he fleshes out the tone with liberal doses of vintage organ, as on the epic intro to ‘Holy Sons’, and adds meat to the bones with his guitar during the solos.

This is by no means a perfect release. It does fall prey to a lot of the pitfalls of many bands of this ilk by simply drawing on too narrow a pool of influence that is currently also being plundered by every other band out there and their grandmas, which throws them into a melting pot in which the competition for recognition is fierce. The Socks, however, do possess a certain je ne sais quoi that could see them rise to the top of the cauldron and catch attention. Their relentless energy, sense of dynamic and groove as well as some interesting song writing touches will hopefully give them an edge over their peers and see them do battle with the Scandinavian overlords!!!