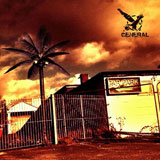 General’s first album Where Are Your Gods Now, released in 2012 on Catacomb Records was a bit of a belter…big on riffs, grooves and showing some killer song writing touches and fantastic, raw, impassioned vocals. It’s an album that should have booted them up the ladder into a position of prominence within the British rock community…but for some reason it didn’t. Maybe this is down to the band themselves. They don’t really push themselves out there, even after a reasonably high profile tour supporting Clutch on these shores things went quiet again. Maybe they sat back and waited for the offers to flood in, who knows. Anyway, out of the blue, here they are with album number two for our delectation and enjoyment.

Goji follows on right where the debut left off, big on riffs, grooves, showing some killer song writing touches with fantastic, raw, impassioned vocals. It is an album that is very hard to fault, and, for a self released effort, is every bit as professional in terms of sound quality and presentation as bands with much higher profiles. In fact, as an album I can’t fault it at all. It is a fantastic collection of songs with a thick, punchy sound and excellent performances all round. It is, in fact as good as any other British rock release of 2015 (sorry I’m a tad late with the review)

General just have one problem. They are always going to be tagged with the stoner rock label when this grossly undermines their potential and doesn’t fully reflect their sound. Yes they play fat, groovy riffs that do occasionally tip a hat in Sabbath’s direction but the truth is General’s sound is far closer to the classic grunge sound of the early 90’s having much more in common with Soundgarden and Alice In Chains than Fu Manchu, Kyuss or Monster Magnet. Is grunge a dirty word in 2016? Not for me, I’ll take that over a million pale Kyuss imitators or tiresome doom bands any day, but in a musical climate where “scenes” seem to dominate, General could fall between the cracks. I sincerely hope not as Goji is a very tasty album indeed, one that deserves attention and whose melodies will pull you back in for repeated listens given half a chance.

General have an album to be very proud of…an album that could, and will appeal to rock fans across a broader spectrum than I think they themselves realise. They have an uphill struggle to get it heard but if they get off their arses and throw their full weight behind it, it will get heard. You can start by going and listening to it today.